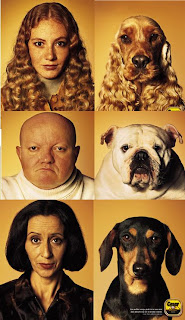 People who look like their pets. I'm excited when I see them at first, sorta like when you catch someone who still sports a mullet or a rat tail. But then my excitement turns almost instantly into anger and annoyance because I don't know how it happens.
This has got to be one of the great mysteries of the universe, I'd like to be flipping through the channels someday and have it all presented to me by the Discovery Channel, or Animal Planet come to think of it, unfortunately I don't think that will happen.
Do people go out in search of this look-a-like connection or does it just happen by chance?
Sometimes its not just the looks that are alike either, I've even encountered people who's animals had the same personality as them. This can be both a good thing or a bad thing I imagine. The weird thing about this is I have actually seen people-pet combos out for a walk that looked more like a date. No, I don't typically pick up after my date if she craps on the sidewalk but you get what I'm saying. (Besides that only happened once and there were no signs posted that said to pick up after yourselves).
For real though how does this happen? Old peoples pets always look old, even if they are puppies they just look run-down and bored and grey like they'd rather be watching I love Lucy. I've met dogs with gay masters that walk with a sway, bark with a lisp, fight to be the top, and watch Glee religiously. Little anorexic girls look like they feed their dogs air biscuits, and then choke them. Big manly dudes look like they shoot up their pitbull with steroids, make them lift weights, and teach them to hump anything that moves. Asian people love little straight haired dogs and Jews love black haired poodles, the comparisons are obviously endless...
Now a days especially that people are dressing up their pets, I've seen more than one dog with nicer shoes than me. I really don't think he needs the new Jordan's, Buster would be fine with shoes from doggy Payless. I could be wrong though, maybe when he gets to the dog park all the other dogs will be "doggin" on him if he has last years shoes. (get it?)... I personally want give anyone who knows me permission to smack the s%*t out of me if you ever see me dressing my dog up in clothes, ever. I can not think of anything that would make me feel like less of a man.
I realize I didn't mention cats once, which kind of makes the title misleading, it just seemed very clever at the time, they just aren't as funny. Plus I have bitched for far too long (ha ha another dog reference). Well, there you go, there was the plug for the felines.
Posted by Nomad at 9:26 PM

I've never been lucky enough to meet someone who looks like their pet. I've heard of these people, and I am very interested in seeking them out, but alas to date I have been unsuccessful in my quest.

I love this!! I had once insinuated that my dog and my mother looked similar but she didn't take that very well lol. I like your style - very funny :)

I heard of tis phenomenon! I've seen resemblances with my friends and their pets too!

Thanks for the advice on my 101 list. I replied to your comment on my blog. And BTW I am your 100th follower...You're welcome. That is one of my list items, get to 100 followers =)

Hilarious! I just linked to your blog, and I'm satisfied! Hey, you might have another follower!

P.S. I totally agree on the whole you butt heads are dressing up your dog thing.

This post was awesome, had me laughing out loud! And thank you for your post on my blog...I laughed out loud again or maybe i'm easily amused. Thanks again.

Keep up the good work, you have one new follower.

Well I think the main thing behind this is... do animals also have spirits/souls/something like that?

I mean, there's certainly some kind of 'bond' there, and seemingly it is two-way... so...

It would not be unlike a child becoming similar to its parents. Or picking up mannerisms from a close friend.

Like watching live sex webcams? Have a peek at BongaCams.