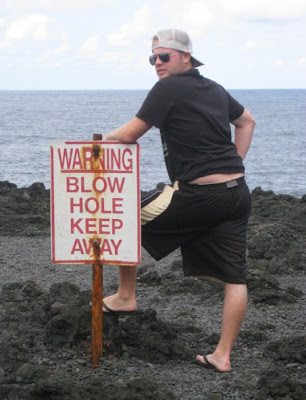 Today is my 25Th birthday, so I really should not have to write at all, but I know you guys live and die by my great words of wisdom so I am here for you. I really want to just sit on my butt all day and watch "Shark Tank", but my DVR erased all the episodes and Glee is not on until later so here I guess I have some time. I've decided that since today is my birthday, I want to write about something with a birthday theme, and I believe I have found the perfect candidate. This group are the low-lives that go around lying about it being their birthday so that they get free things, special treatment, and extra attention.
I imagine the most popular place that this occurs is restaurants. They do it for the free dessert or to feel validated by having a staff full of complete strangers who could not care less sing to them. I've mentioned a few times before that I spent the past 4 years of my life working/slaving at a very busy themed restaurant in Times Square. This restaurant just so happens to be known for a staff full of Broadway hopefuls who sing every birthday song like they were on stage at the Nederlander. We don't just have one version of the song either, we've got about 10 and are always encouraged to think of more. Sounds amazing doesn't it??? Being a themed eatery in Times Square we get our share of birthday parties and birthday dates, it comes we the territory, so we deal. My technique is to embarrass people, because usually they aren't the ones paying, and I figure if I can make the friends, family, or the date laugh and they are the ones paying I may have a better chance at a decent tip. Its logical. I do the birthday song, I give special treatment, I make everyone laugh, smiles all around.
Every now and then though my happy little Bubba Gump world is infested by some birthday thunder stealer, and this I despise. As much as I seemingly love doing birthday songs, because I'm a good actor, I really hate it. We all do, it breaks flow, it causes a mess, and it calls attention to how shitty and degrading our lives as waiters at a restaurant based on a movie about a retarded guy who caught shrimp really are. So their is nothing cute or funny about lying to me about when your birthday is, just because you are a cheap bastard that doesn't want to spring for an actual dessert. Or you are some loser just wants people to sing to you every time you go out to eat. We may be waiters, but we are smart (OK, some of us), we can tell by your stupid little giggle or grin that its not your birthday. If this is the case, I have no problem lying to you and telling you the restaurant needs me to check your I.D. before I ring in your free dessert, I blame everything on the economy or the restaurant, I always works. If you are going to bold face lie to me, we will see who wins this battle. Plus you are scum, I find it equally as bad claiming that you have ball cancer just so you can wear those little yellow bracelets. I know all of you guys don't have it!
Mostly True Story:
I kid you not I actually had a woman in mid October ask if I would sing her son a birthday song because the vacation they were on was actually for his birthday, which was not until late December. Typically honesty is a great policy, but not when you are asking me to do something I hate doing. So, I politely declined her wonderful offer, in turn asking if she would like me to sing her Christmas Carols as well. Turns out she was also Jewish so that joke didn't go over as well as I had hoped. Obviously after that F up I had to return my tail between my legs and do the birthday song for them, just to save my tip (contrary to popular belief most Jews actually tip quite well when they like you). The birthday song did however have my own personal twist to it, I put Matisyhu on real low in the background, I made sure that the sundae had 8 lit candles that we blew out one day at a time, we lifted her son in the air (while still in his chair) and paraded him around the restaurant, we smashed bottles on the ground and yelled random words, and for the finale we chopped off the end of his...OK none of that is true, but that would have been the most memorable 2 month early birthday song little Abraham ever would have had. 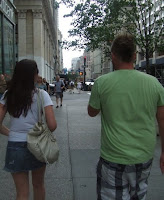 The moral of today's blog is, (if you can find any morality in any of my blogs)... Don't lie about your birthday, its not cool like cigarettes are, its not funny like Carrot Top is, its not a new idea like the wheel, and its not practical like Obama winning the Nobel Peace prize. (See how I used a bunch of things that were like opposites, see that?)... Its dumb and stupid and wrong and bad and poopy and childish. If you cant afford a six dollar cookie sundae maybe you should have taken your girlfriend somewhere a little less "fancy"<--- term used as loosely as Elton John's... wardrobe choices. Hey, it's my birthday I'm allowed to take cheap shots.
PS. Yes, these are pictures of me. one from when I lived in Hawaii, and one from when I lived in NY. NYC is way better, not just because of that hottie next to me, I'm sure I'll blog about the differences at some point in the future.
And of course. I had to include one of our birthday songs... Noland, you're a hit on Youtube...
Posted by Nomad at 1:19 PM

One of the main reasons I'm leaving Bubba's is those damn birthday songs!
Happy Birthday by the way!

Happy Birthday, new follow-e! :) I have always said "I don't lie about my age, I've earned every year". Hope you're having a great one. xxoo

Happy Birthday!! you can't tease us with such a great birthday song and then take it all away...well, great minus the last part, that wouldn't have been too great.

For my birthday (which is the 17th!), I don't expect a free dessert, just for my friends to pay for my drinks.

I don't even like telling people it's my birthday on my birthday. Yuck. All that attention? Not for me. Not even for a sundae.

Happy Birthday!! I guess people do crave extra attention sometimes, though lying about their b'day is rather a cheapshot.

Gosh some people are cheap... you should make up a song about cheap shit heads that lie about their birthday and sing it EXTRA loud when you catch them out :)

Happy birthday!Hope you had a great day!

Thank you all for the birthday wishes!!! Be sure to come back later today for a new blog... Of which I have no idea what I am writing about...

I absolutely hate celebrating my bday.The birthday bumps(in school),the cake smashing on your face, wanting to hide when your friends start singing Happy birthday even when you beg them not to..sigh

Anyway Many Happy returns of the day..hope you had a good one!!

After doing some online research, I got my first electronic cigarette kit on VistaVapors.