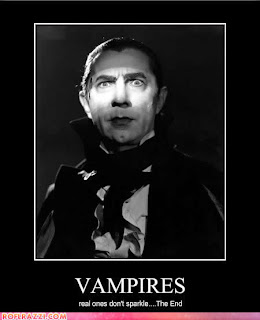 Today's specimen are nothing more than a bunch of bloodsucking little pricks, and no I'm not talking about lawyers (ha ha get it? Not one of my better starts...). Over the past year or two vampires have infiltrated pop culture like they were a bunch of fake tits backstage at a Guns and Roses Concert (pre-gay,Bret Michaels). At first I thought it may pass quickly, like that key I swallowed yesterday, but just recently I realized they were here to stay, kinda like the Backstreet Boys. All thanks to a few books written by a third grader, or for third graders, or something like that. (Btw, why couldn't it have been Nsync that came back, over, and over and over? They were much better)
It is both shocking and sad that Brad Pitt and Tom Cruise do a Vampire movie and it does nothing for us, but here we are 15 years later letting a few substandard actors rule the world. I'm actually a bit surprised that they didn't win the Nobel Peace Prize this year, they've certainly seemed to have done more than Obama, but that's neither here nor there. I realize he's got a lot on his plate like, fried chicken, and not doing anything, it must be hard to blow all that smoke up peoples asses. OK, I'm done this is supposed to be about vampires Ryan, <-- that was me talking to myself. Tangent.---
Anyways yeah, these vampires, they're just coming out of the woodwork these days. The last movie I went to, 2 out of 5 previews were for movies about vampires. I'd be fine with one a year but now these studios wanna produce anything with bleached out teens in it. Maybe that's why teenagers love it so much, they really are no different than most teens in school today. Think of them as emo kids who've learned how to fly, feed on other people, and not take acting classes. I've started to carry around garlic with me just in case any of the hibernating "vamps" <--(that's what I call them for short) decide to surface again for a snack. So far I've been lucky, but there was a homeless man the other day who looked like he wanted to bite me, he backed down once I spit on him, clearly not a vampire. Thank God.
Speaking of God I wonder what He thinks about all this nonsense, here we are again trying to find a loophole in this dying thing we do. I imagine that's why crosses and the sun burn the vamps. I'd be mad too.
I'm not gonna lie, I've even jumped on board the bandwagon a little bit. No I'm not reading any of these children's books, watching Tru Blood (yet), or buying advanced tickets to watch Edward Cullen "run-fly" up trees and give blank stares into the cameras (yes, I saw it). I have not stooped that low, but I have indeed fallen for one of the palest girls I know. (OK, she's not that pale, and she's way hotter than Kristen Stewart, but for the sake of this blog she's damn pale)... In my defense, I figured that logically this was a smart move for me, because if these vamps are real, I at least want to appear as though I've aligned myself with one of them. Thankfully, her bites have yet to draw blood. (....u)
Before I go I do want to mention Blade, with Wesley Snipes. OK, yeah I just wanted to mention it, I don't think any one has ever seen it, so there's no need for further discussion.
In conclusion, because what is a blog without a proper conclusion...? I think that I have devised a perfect solution to end this whole vampire fad that has plagued our world. I propose that we convince M. Night Shyamalan to do a movie about vampires. I mean he's managed to ruin just every movie he's touched since the Sixth Sense, so maybe if he tries he can get us uninterested in vampires all together. Come to think of it maybe we should have him direct the next Saw, Jason, Freddy, Halloween, Twilight, Eddie Murphy, Ben Affleck, and Dane Cook movies, so we can just do away with those franchises/people once and for all. I'm just sayin.
Message from Peta: There is nothing wrong with drinking people's blood, we ask that you just please not do it to the animals.
Posted by Nomad at 5:46 PM

Not so much interested with horror or the vampire sort of thing.

I find it corny and unrealistic.

Horror with a twist on comedy, I may view.

JAJAJAJAJAJA You're just too funny dude!!!! And I could SOOOOOOO do w/out those actors and the Jason, Freddy, Halloween #2345432 in the series. Like seriously??


And I HAVE seen Blade, I mean hellow Ryan Reynolds.. anywayzzz. BYE

I enjoy a Vampire movie, but you're right, not ALL the time.

And I think I enjoy the cheesy vampire movies. You know, the D grade stuff. The stuff that is so bad it's funny.

Special effects? No thanks!

Umm your Shyamalan idea is pretty much genius. And I am kind of in love with you for your comment on NSYNC. But as far as Vampires go.. I think they've kind of pussied out in recent times. They used to be a lot more scary, and now they sparkle??

But if you haven't seen it- "Let The Right one In" is a very good Vampire movie...

"run-fly" omggg i laughed until i cried hahahahaha

thank you for finding me.

haha, love the sense of humour! And about the Nsync, I wish so too!

The picture with the vampire was hilarious: Real vampires don't sparkle. The end. Haha, too true.

Did you read A Woman Made Of Dust's blog? the Dear Hollywood... one. She talked about vampires too in one of her posts, I thought you might be interested in reading it, here: http://bit.ly/WhUo9

I shortened the URL. Anyway, visit my blog sometimes if you like. (:

I just found your blog through your comment on my blog (I'm glad you appreciate a Schindler's list joke) and I love what it so far.

The only vampire movie I ever liked was Dracula 2000, for reasons I can't remember.

I hate Twilight, for no other reason then the Mormons are really into it, and you shouldn't trust anything that attracts a lot of Mormons.

on a side note, Nsync WAS way better.

and as for calling your GF pale, it's not our fault the place we live only has warm summer weather for about three months out of the year.

Wait - PETA is not ok with humans drinking animals blood (which is TOTALLY understandable), but it's ok for humans to drink human blood??? I don't even know what to say to that...

i'm glad everyone agrees that nsync was better, at least i got that point across...

misskimmy, why is the person in your picture eating a flower? checking out the dear hollywood blog. although i dont really like supporting other peoples blogs. JJJJK.

ambar-dont be offended i didnt use all those stars and stuff by your name. i love ryan reynolds as well, but i cant watch wesley snipes to get to him, just cant do it.... that'd be like eating a piece of crap to get to an m&m on the inside. im not that committed.

carissa- shyamalan is a turd, i wouldnt even let him direct my infomercial.

i'm glad everyone agrees that nsync was better, at least i got that point across...

misskimmy, why is the person in your picture eating a flower? checking out the dear hollywood blog. although i dont really like supporting other peoples blogs. JJJJK.

ambar-dont be offended i didnt use all those stars and stuff by your name. i love ryan reynolds as well, but i cant watch wesley snipes to get to him, just cant do it.... that'd be like eating a piece of crap to get to an m&m on the inside. im not that committed.

carissa- shyamalan is a turd, i wouldnt even let him direct my infomercial.