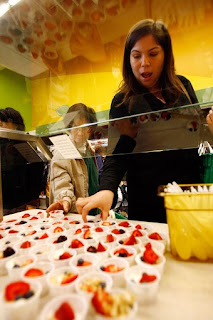 hahaha! it's people like you that make me hate my job! (: you wouldn't believe how many open can, bags, and containers i find on a daily basis. deffecting that stuff out is a pain in the weenie.. though, i guess that's not fair to say since i don't have one? (:

I can't relate to this because we don't have them here. It's only through the magic of sitcoms I know who you're talking about.

They need to be better trained apparently. As you said, kids make the decisions so they should be treated as numero uno.

As long as I don't mix up the sample givers with the perfume sprayers, I'm good. If I'm hit with both in the same day, I risk being 'spinach in teeth who smells like rose-petals' girl, and who wants that?

hahahahahaha! i love this post because i feel the same way about the sample givers! they look at you like you're some kind of gluttonous buffoon if you just sample and move on instead of buying that stuff...and expect a glare over the top of their bifocals if your children ask for more! gee whiz! i'm still laughing here!
great blog!!! =)

I never trust these guys either. Nice post.
plentymorefishoutofwater.blogspot.com/

i love this post!! made me chuckle. ps i love your layout!

The not giving samples to kids goes hand in hand with the blog about how sue-happy America is. If little 9-year old Ryan was allergic to something in the wienie sample, his mommy could sue!!! AHHHH! Kids are legally to dumb to know this stuff.

Sam's Club/Costco are the the worst.

Apparently my Grandma did that for years at one of the two grocery stores in town... She doesn't talk about it much.