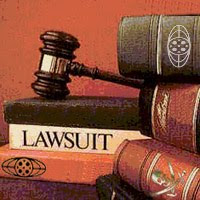 America is a great place to live, most of the time. We are pretty much free, at least that's what Big Brother would like us to think. In America it really is possible to come from something to nothing, with a little hard work, persistence, brains, gambling, lottery, or luck on a reality show anyone from any background can make it big and rich here in "The States". If you don't want to work hard or try your luck on American Idol, there is quite the loophole that some people have mastered. The art of suing to get rich, oh boy aren't these people shameless.
Tired of working a 9 to 5? That's OK, come on down to the local McDonalds, pour some coffee on yourself, and walk away a millionaire. Who would have known that shit was hot. This has proven faster and has better odds than winning money in their Monopoly sticker game. I cant forget the people who have sued because they got fat from eating their food... I shit you not my foreign friends, in America you can actually sue fast food companies for "making you fat". It's true that money cant buy you happiness, but it damn sure can buy you a lot of Value Meals from McDonalds, go ahead and SUPER size it for me too please.
What about the people a few years ago who sued when they got trampled on "black Friday" running into a Wal-Mart. (For those of you who may not know, "black Friday" is the day after Thanksgiving in America, it is the busiest shopping day of the year, with loads of things on super sale, people line up the night before). Anyways, a few years back people were racing to get to the TVs or donuts or something and some of the weaker, slower, fatter ones (no doubt) fell and got trampled. Sure enough these slimy bastards filed a law suit against Wal-Mart and won millions of dollars. I worked at Wal-Mart for about 3 years during High school, while they daily stomped on my dignity and I didn't get so much as a pat on the back when I left. Then these sh&*bags are walking away with millions back to their trailers, it just doesn't seem right. Now, I'm not advocate for Wally Worlds practices, but I'm pretty sure they didn't force you to run, and fall, and get trampled by the rest of the trash hoping to get a $99 TV set. Shame on you.
Last night on Conan, which is indeed where I get all of my news, I heard about some guy in Atlanta who was suing his pill-rection company because he had a boner for two days. Now, if he needs this stuff in the first place, I think he should be thrilled. One, because he still actually gets to use his ding dong and two, because he still actually gets to use his ding dong. When you are that old you should be thrilled that science has found a way to keep you Hugh Hefner-in away, and that you have enough money to convince someone to want to see it. In the past when it was over, it was over. I imagine 40 years ago you didn't get to play extra innings, if you know what I mean, no one else was coming up to bat, eh. So if you just so happen to be blessed with 2 days straight, make some use of it. Call your friends, call Guinness, call Oprah, call the circus, but don't call your lawyer. I know I'd finally be able to hang dry my laundry.
I know Binder and Binder and every other douche of a lawyer feels the need to make these retarded commercials. But they work, so I cant blame the lawyers, even though they are clearly using their home video camera to shoot these things. It just pisses me off that I have been in a legit law suit for almost 3 years with almost no progress. And you dick wads can sue for spilling coffee, to each his own, I'm over it, but you guys are assholes.
Posted by Nomad at 12:32 PM

It's so outrageous, isn't it?

This is not exclusive to America.
There is a woman here who tripped and fell in a supermarket and sued because she's a clutz.
Then she applied for a job and sued on discrimination cos they didn't hire her.

This is the reason we have so many stupid warning labels!
For Example:

"For external use only!" -- On a curling iron

"Wearing of this garment does not enable you to fly." -- On a child sized Superman costume

"Do not drive with sunshield in place." -- On a cardboard sunshield that keeps the sun off the dashboard.

"May irritate eyes." -- On a can of self-defense pepper spray

"Do not iron clothes on body." -- On packaging for a Rowenta iron.

Anybody else wants a FREE MC DONALD'S GIFTCARD?