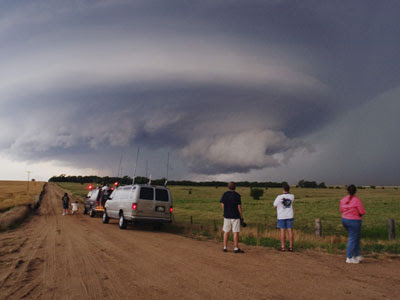 As I sat home today flipping through stations on my television I came across my next victims on the Discovery Channel. By the way if you don't have this channel, its pretty much the only one necessary, it's got great programs and you can actually learn from it (and no I am not sponsored by them). In fact I think we could probably do away with high school here in the U.S. if every family just showed their kids the Discovery Channel and maybe the Health and History channels as well. That is really not saying much, I did manage to sleep through the majority of my classes and still pull mostly A's. Anyways the group that I want to call to attention today are the "storm chasers". (Wow a first paragraph ramble, that was pretty early even for me)
Now, I'm an adrenaline junkie, I love sky diving, jumping off 70ft (22ish meters) into the ocean, driving with my eyes shut, yelling racial slurs out my car windows in Compton, "dressing ridiculous, blue and red like I don't see what the big deal is", all kinds of really fun things like that. But, storm chasing is kind of pushing it, this quickly exists the realm of everyday thrill seeker and rapidly entering the straight jacket department. I'll admit when I saw "Twister" back in the nineties I was all about chasing some storms, but that was really just because I had a mad crush on Helen Hunt. What happened to her by the way??? Actually even at nine I had sense enough to realize that this was just a movie, but apparently some people have decided to turn this lifestyle into reality. 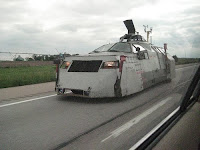 They turn their old cars into semi- armored still old cars and then cross their fingers in hopes that this pile of metal will save them from the big bad tornado. Are you kidding me? Hello, these storms pick up houses, they pick up HOUSES, THEY PICK UP F%$#@NG HOUSES, so do you guys really think your home made Toyota Camry "Tank Edition" is not going to be tossed around like Zac Effron at a gay bar. I am certainly no scientist, but even I watched enough Bill Nye in my day to realize that a heavy car still weighs less than a house. Even if the heavy car is a trailer with Oprah in it.
When I was growing up in Texas there was a tornado that literally wiped out an entire town, one day there was houses, and stores, and the next day there was debris. Which is why I said it wiped out an ENTIRE town. These storms take no prisoners, OK I guess that was a given. So where do we draw the line between things that are super cool in the movies, and things that are super stupid in real life? I mean I liked Jurassic Park but you don't see me cloning dinosaurs from a mosquito stuck to a cane, and then trying to build a dino-park on some island off the coast. Truthfully, I tried for about 9 years, but apparently the government wont fund this sort of stuff since that T-rex came back and F-d up L.A..
Storm chasers, I mean, I want to say that you guys are brave, but you are really just the alligator wrestlers of the center of the country, which still makes you dumb, not brave. When I see these dudes wrestling alligators, believe me I am not rooting for the human in this situation. I want to see the reptile come away with one out of four limbs, no questions asked, the more the merrier. You mess with the bull you get the horns, right? So comparing this to the case of the storm chasers, I don't know maybe this would be equivalent to losing your car. Or even better maybe having the twister throw a stop sign at you and cut off a leg, or get lodged into your spleen. Remember in these situations its not always that the wind is blowing, its also WHAT the wind is blowing. We all remember the cow that went floating by in the movie, this is the sort of thing that I am talking about.
The thing that really gets me is that it cant be like on the "Deadliest Catch" where the fishermen are making like $100,000.00 for three months of work. The majority of storm chasers are doing it for the thrill and adrenaline rushes, which don't really seem to pad the bank account. Sure the guys on the show make money now, but they have not always. Who wants to play Russian Roulette??? Or let the dude in the wheel chair run with the bulls??? 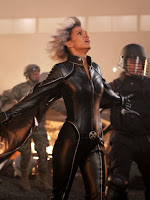 In conclusion, storm chasing is fun to watch, but I wouldn't want to be one and I cant respect them because something is clearly loose in their brains like a news anchor. Don't think just because Dorothy made it through a tornado that you can, things happen differently in OZ. I mean there were talking lions, and scarecrows, and midgets actually looked happy, that place was different...
<---------The only Storm that I will approve the chasing of is the one from X-Men, I think the reasons are obvious (*)(*)...Up up and away...
Posted by Nomad at 10:25 PM

And then people get surprised when storms kill these idiots.

I have to admit, I do enjoy watching the storm chaser programmes....but I do agree that 99.9% of them are totally dillusional about it.
I think I have an enhanced curiosity because it just doesn't happen here in the UK. I mean, the last "tornado" that hit anywhere just pulled off a bit of someones roof and a chimney stack. Thats it.

and the first picture is awesome. i dont understand though why people put their lives at danger someetimes, but i mean if they dont then who will. i guess.

lol. I root for the alligator too.

LOL, great post babe, I actually laughed out loud and not just to myself

The discovery channel is awesome.

LOL I like watching the storm chasers show. It makes me laugh. I love watching hurricane specials and anything about rain. (I just hate when it rains when I have to go out tho) They are dumb tho. I must agree

It depends on what they do it for. Some do it for the thrill; others do it to get attention (balloon boy's father).

I always thought storm chasers got paid by the weather people to learn more about storms and stuff like that...no?

But yeah, I really can't sympathize with people who put their life in danger for no important reason (especially if they're not making a decent living out of it).

But then again, our troops overseas aren't making much either. =(

sco, the people surprised are idiots themselves.

quinc- i can admit i enjoy watching pretty much everything i make fun of in my blogs, it makes it easier to make fun of.

rhi- we all root for the alligator. :)

other people- thanks for reading.

Discover how 1,000's of people like YOU are working for a LIVING from home and are fulfilling their dreams TODAY.

Get daily ideas and instructions for earnings THOUSAND OF DOLLARS per day FROM HOME for FREE.