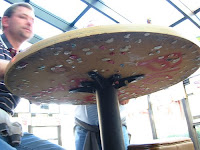 Well today is day 69, so you know what that means??? It means that you sick bastards probably want me to do something sexual, and based on that assumption alone. I refuse. Actually that's not why at all, I am just not feeling compelled towards any sexual groups today, its unfortunate. However, the group I am feeling the need to bring up today are the menaces who put their chewed gum underneath tables (or anything for that matter).
When I worked at "the restaurant" in times square every so often we would have this very exciting opportunity called "gum night". We were so excited to be lucky enough to stick around for an extra hour at 2 am in the morning to scrape gum off of our tables and chairs. Management would hand out some paint scrapers and gloves (if we were lucky) and let us just go to town. We'd flip the tables over and attack the rainbow assortment of gum people decorated the bottoms with. Some pieces were removed easier than others, some had hardened by the time we got to it (which for some reason turns it into crazy glue), some pieces were fresh enough to have possibly arrived that very night. Doing this type of bullshit "side-work" is what has created the jaded person whose blog you are now reading. Ending a $200-$300 night by getting on my hands and knees and hammering someone else's gum, off of someone else's table is very humbling, but more-so bitterness inspiring. As I sit there chiseling you can bet I am bitching non-stop about how I am not paid to be the janitor. Surprisingly enough the $4 per hour I make as a server is not quite worth the hands and knees shit. At the same time I am also thinking of all the embarrassing things I will say and do to the first person I ever catch sticking gum under one of my tables. Trust me!
Really though, what is wrong with these people? Every table has the same number of napkins as it does humans, seems like the first reasonable place to stick your waste. Also, each table is equipped with an entire roll of paper towels, they are not there for show. Swallowing is always a nice clean option for those lazy bastards among us. (If your fear with this one is that there may end up being a gum tree growing inside you, I've looked it up, that only happens if you swallow watermelon seeds). I understand that gum has been made conveniently sticky leaving the under-table option open, but this does not make it the appropriate one to go with. Sometimes we have to make mature decisions, trust me I know this can be hard. For instance, sometimes a fountain in the middle of a nice park really seems like a great place for me to take a piss or maybe even a bath, but unfortunately those were not the functions the fountain was created for. Get my drift? If I ever catch someone in the future sticking gum somewhere that I may have to clean it you better believe that I will make them stand up and put it on their nose. Either that or go get them the paint thingy to scrape off everyone else's.
The only place this was ever acceptable was back in school when you would get caught with gum and you were not good at swallowing, you could use some slide of hand magic to get it out of your mouth and under your desk before your teacher made it to your desk. But hopefully since grade school you have learned some manners. Most smart people carry the wrapper the gum came in so they can put it right back into it when they are done... How bout that stroke of genius???
Honestly I probably wouldn't care that much if I had never ended up having to clean up after other peoples nasty habit, but the experience has made me a strong supporter in doing bad things to these people. So think about that next time we go out to eat. Happy 69th.
Posted by Nomad at 11:51 PM

Wait, so it's not pixies that go along and clean up the messes people make?

You sir, have enlightened me.

It's unfortunate that I was eating while reading this blog. Made me want to vomit. Like really.

Ugh! I hate people who put gum under tables - more than once has my knee hit the underside of a table and come out with someone else's gooey, stretchy, impossible to remove gum attached to it.

That is gross but I can top it, hahaha. We once had a table (at Bubba's in NY) who's kid (I assume) puked in the bucket we keep on the table to hold condiments.... and they didn't mention it to anyone. It was NOT a fun discovery!!!!!! I almost puked myself!!!

Ahhhhhh I hate this!
I have lost count of the amount of times I have sat at a desk or table and come away with gum stuck to my trousers/skirt/knees. Bleurgh.

Thank God I never had to participate in "gum night." So gross.

I agree that is disgusting. But no better really than spitting it out on the ground. I am constantly stepping in gum.I hate it. I would rather step in dog shit I think.

grandma told me not to swallow my gum because my you know what will slam shut! Just sayin'

P.S. I use the corner of paper napkins to get rid of my gum.

Oh, how this infuriates me. I just don't get. I would never even CONSIDER putting gum under the table because we all hate the thought of touching someone else's chewed goo. In a pinch, I've folded mine in a sugar packet, but never, ever stuck it anywhere inappropriate. I'm sorry you had to go through that!

Hahahaha, oh how I'm glad I found your blog. There's just enough bitterness here to keep me happy for a long, long time. Also, that was a part of your JOB?! WOW. That sucks.

That's a non-favorite job of school janitors too.

This post is barf-worthy to me and really gets me all worked up into a FRENZY.
When I was a little girl I discovered a purple wad of chewed gum under a table in McDonald's. I was poking it and my mom noticed and says "NATALIE DON'T TOUCH THAT THERE'S GERMS ALL OVER IT!"
And then starts my gum-phobia.
I seriously have a phobia to gum. I can't chew it, smell it, or watch people chew it because I get physically sick and start to have anxiety over this. I can't even look at a piece that's been throw out in the trash can because I feel like it's going to contaminate me.
You know what? I'll stop this story book comment here. You have inspired my blog post for today.

sco- it is indeed real human peoples who have to clean these messes. i am surprised that we have not figured out how to outsource these jobs to china yet.

tatyana- hope you made it to the toilet in time.

crazy people- glad you feel me.

kelly- i found some pretty gross things in those buckets but you win for grossest.

quinc- id wear pants from now on if i were you.

this girl- you barely participated in work while you were there.

carissa- you are right.

jules- i go sugar packet too when there is no napkin around.

redhead- glad you appreciate the bitterness.

secretia- are you a school janitor?