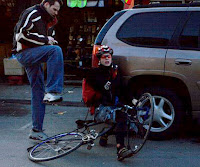 Does anyone know what prompted cyclists to believe that they are now the most important people to roll the earth. Maybe I'm alone on this one but I have never mounted a 2 wheel Schwinn, strapped on one of those extremely attractive helmets and thought to myself.... "Ryan, lets go piss off every pedestrian and and car that I come into contact with". Shocking, I know... I dont know what it is about those shiny blue and red helmets that makes these guys think they are untouchable and unbreakable, but I assure you they are not.
Living in NYC for 5 years I've had my share of run ins with these guys, oh dont worry, of course I'm gonna share a few stories :)... First one: Just left my apartment for the day, got my Ipod on full blast dancing down 49th street just like they do in The Newsies. I get over to 8th avenue and sadly cars are coming, so I'm going to have to wait briefly until there is a long enough break to dart across the street. (Remember this is NYC, we do not have to wait for signals, those are for tourists and idiots, basically one in the same.) 8th Ave is a one way street heading northbound, so naturally I should not have to look north for cars, I look south. Im watching, watching, watchi... OK, clearing----> so I start out from where I was waiting only to be slammed into on my left side by a "Famous Rays Original Pizza" delivery boy, (boy or man, I'm not quite sure, he was Mexican, and had a mustache, that could go either way. I sure as heck wasn't waiting around to take his insurance, and he was not waiting around to get deported) so we both went on our merry ways. I was pissed, for a minute, and then I realized it would make a great blog story 2 years later so I got over it quickly enough. OK, one more story. Same intersection, now on the east side of the street, looking south (to my left) waiting for another break in the traffic. Perfect, here it is... I step out----screeeeeeecccchhhhhh!!!! I look back to my right side just as (in slow motion mind you) a business man on a bike comes slowly flying over his handlebars landing about a foot from me. Apparently he has some great front breaks, and no back ones... This was a bit awkward for both of us, but as he was picking himself up and dusting himself off, all I could think was, ha ha ha ha ha ha ha. I went to reach and help after about 15 seconds of holding back laughter, but he was in much more of a hurry than I was, I guess there were about 2,ooo people there who just watch him fail miserably. Thank goodness he was wearing his helmet :)....
I understand the convenience of a bike, its faster, and in NYC really all you need other than your feet. However, just because it is smaller than a car, this does not mean that you should ride it down the sidewalk. Its not a side stand, and its not a side walk, if you are going to be using a sidewalk to go from point A to point B, walking is the preferred method of transportation. If I had a bundle of sticks I would be proud to jam one through each and every one of these douches spokes. I'd feel like it was my duty as a pedestrian in fact, people would crown me.
Truth be told, it is not only annoying when I am walking though, they are just as big of a nuisance when I am in a motor vehicle, because it just so happens that this day they are too experienced for the sidewalk and too good for their designated bike lane. They want to weave in between cars, go slow up hills, and do all the other annoying things they do. All I want to do is get in front of them and slam on my breaks. Or there is always the option of letting them drive along side me and opening my door, it looks great in movies, but I fear that may cause too much damage. When I'm driving I actually have created a point system for items that I could potentially hit (mainly humans, but certainly not limited to). Pedestrians, for instance have all sorts of point values typically from 1-15 depending on their age, gender, shape, height, style, and race. Obviously the bigger ones are worth less, because it would be harder for them to get out of the way, I'm sure I'm not the only one who plays this game. Groups are worth a range of points, if they are old people, I'll award myself very few points, seeing as how they don't have much life left anyways, school kids are the most for the opposite reason. Bikers however, automatic 20 points, not because they are harder to hit, but simply because I hate them even more than I do the walkers. You even get extra points for a proper hit and run, up to fifty bonus points, I am the best though, so don't try and beat me at my own game.
Cyclists, whether you are professionals in your ball tight spandex, delivery boys for the local pizza shop, getting to and from work in a suit, or just a normal dude out for a leisurely afternoon ride you should make sure and always wear flashing lights and a helmet with some shiny reflector stuff on it... No, not to keep you safe, ha ha, you are silly, its simply so we can still play the game at night. It is not nearly is fun if we hit you by accident, we need to be able to call out the points before we hit you. Good game.
Posted by Nomad at 4:31 PM

I'm going to take your blog WAY to seriously and advocate for bikers who DO follow the rules of the road, whom you failed to mention. I ALWAYS ride respectfully and follow the rules of the road, but face constant danger from irresponsible drivers. Getting nailed by these people is a very legitimate concern of mine and my fellow bikers. I guess that is why I just can't find this funny, but I totally acknowledge I'm coming from a biased point of view. A helmet is pretty useless if you're slammed by a truck that whips into a turn with out looking or signally when you're legally riding along the bike path or far right of the road. Most bikers I know are pretty darn considerate, and we hate the people you seem to be blogging about today just as much as you do, please don't let them ruin the reputation of all bikers.

HA!!! That's hilarious! I like to ride my bike but it's more like a kid going through ditches and not on an expensive bike. But I would like to be hardcore and wear spandex and have a rearview mirror attached to my handles! I will try not to be an ass while doing so!

I don't live in a very biking friendly city, so I don't see that many of them, but every single time that I do they are slowing down traffic, or causing near accidents. They drive me crazy!!

By the way any story that has the words "dancing down 49th street just like they do in The Newsies" is going to make me smile!

I've never had a problem with cyclists but I think NYC cyclists are probably different to here. Much pushier and in a rush in NY by the sound of it.

Oh I know how that's like. We have a daft administration which made 'bike paths' on the freaking sidewalk & with my luck I get the ultra annoying, omg-your-walking-in-my-path cyclists. Yeah, I'm that lucky...

Haha...The dancing in the Newsies is awesome, thats actually what I am dressing up for for halloween. As for the cyclists, I have never really had a huge problem with them...however I am very very good at getting hit by cars in crosswalks. so far I have been hit by 2 cars, (both in parking lots, and both were my fault for not looking both ways) and I almost got killed by a truck in a crosswalk who was going way to fast and clearly was ignoring the stop for pedestrians in the cross walk sign. So I threw my french text book through his windshield. He called the cops, police guy showed up...looked at me, looked at the truck driver, looked at the skid marks in the road, looked back at me and said what happened I replied with "I was in the cross walk, I had to jump out of his way to not get hit, I happened to drop my text book as I was jumping out of the way. He hit the text book." then the cop wrote him a ticket for failure to stop for a pedestrian in the cross walk. Victory for pedestrians everywhere.

I have to go watch Newsies now.

I completely agree with you. Thank you for posting this it just cracked me up. I haven't decided which is worse, people who walk behind your car while you are trying to back out of a parking spot or bikers. It's a tough call.

I am so happy you wrote about this! I encounter many on PCH (Pacific Coast Highway) and most of the time, have to get out of the right hand lane to accommodate them. I am all for saving the planet, but can our planet have more bike lanes?

Jeez! What is with all the hating on cyclists? As a whole we are NOT that bad, and even the assholes do not deserve to get killed by a vehicle!

LOL this is sooooo true. I read somewhere, that when "I'm a driver, I hate pedestrians, and when I'm a pedestrain I hate drivers" but whatever I am, I always hate cyclists.

I may be one of the rare ones, but my state requires bikes to follow all of the rules of the road that cars need to follow--stop signs and one-way streets included.

But, then again, I'm one of those "idiots" who waits for walk signals. Again, law is law, and I don't want to give any weasely lawyer an opportunity to claim that "I had it coming" should I ever get hit.

Did you know that you can create short urls with AdFly and make cash for every visit to your short urls.