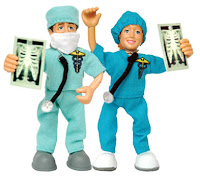 I almost feel bad making fun of today's guests. Almost. No one likes a know it all, but it's even worse when their know it all degree comes with a specialty. Today I am talking about the instant doctors among us. Those douche's who award themselves honorary PHD's and parade around giving medical advice. The trouble is they sometimes are so convinced they know what they are talking about that we almost listen. Kinda the same deal with people like Dr. Phil or Tyra, pitiful.
Now, I watch a lot of Greys Anatomy myself, and by a lot I mean I have not missed an episode. However, in no way shape or form do I believe that this allows me to practice medicine. Why then do these people believe that after zero or less days of medical school that they are fit to diagnose my bruised back. Once I've somehow let it slip that I am in pain, they run through all the typical questions that a doctor may ask. I feel like that's being a bit intrusive when you are not in fact a doctor, yet I humor them for the moment. They spit back 9 different possibilities like they are WebMD, leaving me almost in tears. I should have known, I'm bound to leave a conversation with them feeling worse than I did before. Chances are they've wrongly convinced me that my sore back could be anything from back cancer to AIDS, which I don't even know if back cancer exists, but I'm worried regardless. That is at least until I realize that they are not using lessons they've learned in medical school or in a residency, but they are indeed recalling the season 3 finale of Greys. Phew, good thing I didn't let them operate as well. Don't ever mention a headache around these guys or you re bound to walk away worried you've got a brain tumor.
I'm actually surprised that they don't carry around little prescription sheets, they certainly always know what medicine will be necessary to cure my ailments. When half of the crap we deal with could be cured with orange juice, a glass of water, and a nap. the best is when you know what it is that's wrong with you, whether its something you've dealt with your whole life or you've just come back from the doctor. There they are wanting to argue the cause and the treatment, "no, it's not allergies that make you swell up like that, you have internal bleeding...". That's when you just smile and walk away, you have to learn how to pick your battles with these ones.
The only people I will allow to be medical know-it-all's are grandma's and mothers, and only if they are related to me. Which makes that pool quite small, mom's and grandma's always know how to make things better, even if it consists of sticking Elmer's glue into a large gash to stop bleeding. I know with them its like God made them honorary nurses, they don't have all the knowledge but they can at least patch you up until the doctor gets there. When we were young however, we would believe anything they said about anything, every pain I ever had---growing pains. Is that even a medical term? Because in my house it sure was, every pain I ever had could be attributed to growing pains. At least now I'll know how to diagnose my kids.
Posted by Nomad at 7:50 PM

How do you feel about instant psychiatrists? Because I have SEVERAL theories about your state of mind.... ;) I'm sure I'm not the only one!

Between "House" and "Scrubs", I can tell you that your dying, and make you laugh about it... I'm just gonna need to ask a few questions first...
And, I'm not gonna lie, you're taking a lot of my good complaints away, but you're sure as hell entertaining in the process. Damnit.

Ready for the best comment you've ever received? I know I've built it up, but it's good. Trust me.

You're lucky you don't hang around me. As a massive Scrubs fan every time somebody sneezes I ask them to poop in a cup for me.

It doesn't even have to be people I know. Clients. People on the train. Homeless guys (who will do it for a tenner)

Remember, everything comes down to poo.

Nice post. You're quite a social commentator. Keep up the good work.

The best is when you make something up like "oh I read somewhere that these symptoms can lead to blah blah blah...." and see if they go along with it. Gives you a great sense of triumph to know you have secretly caught them out...

Ha! I know "Growing pains" was a medical term at my house while I was growing up. Now, at 23, I feel the need to use the term for every little pain that I may have, even though I'm pretty sure that's not what it could be.

Hey, a friend linked me your site. So many of these posts are similar to what I write about! CRAZY!!!! :) I'd love to link to you on my blog. Keep up the good work!

see i wish i was more into "house" or "scrubs" than i am into greys anatomy, because when i tell people they are gonna die or they should poop in a cup i either get crying, or dirty looks.

thank you plentymorefishoutofwater. i kept wanting to hit the space bar when i was typing your name. i'm going to try and keep up the good work, i promise. :) tell friends haha.

everyone. eat your vitamins.

I agree with the trust issue..
I call mom whenever I get sick to describe me some medicines..she says:what the hill are you doing in med school if you can't cure yourself (yes I don't trust me on myself)..she writes some herbal & bam! I feel great:) nothing like old school

I like your blog.You have a creative genious in you.i lovethe flow of your sentences too.keep up the good work!Follow me too I can e of some use to you later!
Love,
www.lifeartstrainer.blogspot.com