Like I've said before I am certainly far from a fashion guru, I like being comfortable, I'm a t-shirt and shorts kind of guy. I have all sorts of nice fancy clothes but you will usually find me in some basketball shorts, a cut off shirt, and if I can help it commando (I like to breathe so do my boys). I am not going to say that I am the right authority to pass judgement, I am certainly no Michael Kors. However, as I do on a daily basis I am going to give my 2 cents. Today I will verbally rape the douche bags who wear Ed Hardy, hopefully they walk away limping.
About a week ago I was at Disneyland just minding my own business, when out of nowhere pranced a gay couple clad in matching Ed Hardy shirts. Its amazing how fast the happiest place on earth can turn into the saddest place on earth. Not only were they wearing matching Ed Hardy shirts red and black tiger across the back, but they were wearing obviously FAKE Ed Hardy shirts with a red and black tiger across the back. I thought gay people were supposed to have fashion sense, clearly they checked that at the door along with their dignity. When I think about it I don't know what is more disturbing, the fact that two grown men were wearing matching shirts or the fact that they probably still paid $35 for a Fruit of the Loom shirt that some Asian man ironed an Ed Hardy logo onto in his basement. 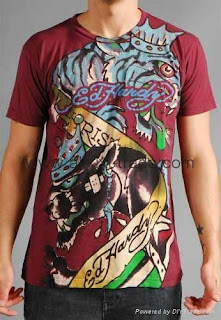 For those of you in middle America, or in other countries who have yet be probed by this fashion disaster, consider yourselves lucky. This is the new company for douche bag frat boys, Jersey Guido's, and celebrities without stylists. Pretty much only worn by people that you would want to punch in the face. So I give you all permission to do that to any you may encounter, sure there may be some innocent tourist who picked one up on Canal Street, but this is a chance I am willing to take, many times over.
I don't have all the facts on company history, but I believe it was formed when Von Dutch took a dump. If you were fortunate enough to have dodged the Von Dutch fad, it was another popular company about 5 years ago formed when I took a dump. So for that I apologize to the world.
Ed Hardy is described as a vintage tattoo wear company that manages to charge upwards of $100 for a t-shirt. Apparently this is for those people who like the look of tattoo's but have problems committing. Also for idiots who think it is reasonable or acceptable to pay $100+ for a t-shirt while there are starving children around the world. A majority of the designs are anything but "bad ass", they look more like someone stuck a 4 year old, a box of crayons, and a Bedazzler in a room and said, "hey design a shirt",(they probably didn't even say please).
I would like to stage a boycott, but I am going to go ahead and assume that anyone who reads my blog has enough sense to have never purchased anything from them before. I hope. What we should do though is treat these shirts like Peta does fur and start dumping buckets of paint on these people when you see them on the street. Of course you cant always be carrying around paint, I understand, so in this case spit will do just fine. You don't need to use your words, just dump or spit and walk away, they will get the point. Eventually. Thank you in advance for your participation.
Posted by Nomad at 10:28 PM

I was starting to wonder if it's just me that's ignorant because I was thinking AGAIN "I don't know these people", but then you suggested that this trend seems to be confined to a certain part of the States.. so it's my whole country that's ignorant.

OR my country is smart enough not to get involved. I know I wouldn't wear one of those vomit inducing shirts you've pictured there.

I will commit to be a part of this project. It will be a good day when people no longer wear their ridiculously overpriced ugly shirts for fear of being "spit and painted" a very good day!

That is a great shirt!

It is ugly and it seems trashy couples love to be matchy matchy in it all over the world... losers

How did you know the Ed Hardy shirts at Disneyland were fake? It must take a keen eye to know this O.o

I almost bought an Ed Hardy bag... from the flea market. but you can't trust those things. And because Ed Hardy has been IN for so long now it is probably already OUT.

Um, this wouldn't even look good as a tattoo. Wtf?

CRAP! I totally unsympathetically have an Ed Hardy hat...but that is it-as far as my douche-bag fashion sense (or lack thereof is concerned)...No plans on giving it up...And Yes, guilty as charged, I yearn for a tattoo but am chicken as hell : )

However, I do draw the line at the clothing disaster. Especially men wearing bedazzled shirts and pants. I used to dance and ice skate, and I didn't even have such flamboyant looking outfits.

I like to look at the positiveness in all of this...Ed Hardy wear is like animal tagging of D-bags...no longer are they hidden, they are out in the open and we can avoid them, or publicly make fun of them and their shimmering shirts.

They're ugly shirts!!! I can't believe some people want to buy that sh*t.

I'd rather spit on a person wearing fur, than someone wearing one of these shirts, though.

Hmm...sounds pretty ugly. You, however, sound as though you have impeccable taste...now I've massaged your ego, help me! I'm meeting an ex I haven't seen for three years for dinner. What do I wear?!

I am IN! I don't get it. When did it become cool for straight guys to wear sparkles? I have a dragon shirt wearing fool in my office right now, and I give him a hard time every day/

I always struggle to keep my self from dry heaving when ever someone passes by and asks me where the Ed Hardy store is.

Sometimes innocent tourists have to learn shit the hard way!! Of course, for them we may have to include subtitles

my friends and I came up with a new idea for the next fad. Clothing line called DB..

yup, you guessed it. DB stands for DOUCHE BAG. this way, when they walk into a bar or down the street, at the grocery store, where-ever they are, you automatically know they are a douche bag.

The Ed Hardy craze has just hit India...but luckily only Indian filmstars and really really rich people have the kind of money to actually buy and wear these t-shirts. Here one Ed-Hardy T-shirt could set u back by about Rs 11,000 or roughly $235! Most Indians don't even earn that much in a month...some not even in a year!

kitty, i'm probably too late getting back to you, but i say it depends on what you are trying to say to him... dress like a librarian if you are off limits, dress like a schoolgirl if you want to have some recess after dinner.

carissa, i love sparkles. just not on an ugly shirt.

natballs, you could just tell, trust me haha...

glad so many people agreed with me :)