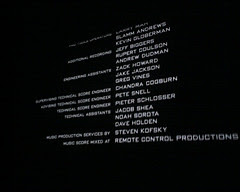 Today is about a simple set of beings, this is not a group that I hate, or dislike, and honestly I cant even say they really annoy me. But they do confuse me. They have been around for years, but its only been recently that they have made themselves known a little more frequently. Of course I am talking about the people who clap at the end of movies. They are such a simple group of people, I've decided not to be too harsh today, not that they would get my complex sarcasm. Just to be safe in case someone explained it to them though.
Before I start let me admit that I have clapped in a theatre before, out of peer pressure though. I was afraid that the all the Harry Potter nerds with cloaks and wands would bludgeon me to death if I didn't give the credits a standing O. I am all about showing your support, but that's why I paid the $12 to see it and didn't download it off of the Internet. I clap in shows and concerts, or any other venue in which there are live performers there that can hear me. But if I'm not watching the movie with the director or any of the actors, I realize that no one cares. The only clapping they really want to hear anyways is the clapping of my money into their bank account. I wonder if these people who clap in at the end of movies clap at other arbitrary things in their lives. For instance a toaster, do you think when it is done toasting their Pop Tarts that they stand back and give it a round of applause?? Or when the person they hate is voted off of Project Runway do you think that they stand up alone in their living room and start applauding. This may sound a bit nuts but really it is the same concept. Your toaster cares as much as your TV and your TV cares as much as that projection screen at the movie theatre. Call me crazy but I see no difference. The only time it is acceptable to clap when you are alone, is if you still have clap on lights, or any other clap on product.
These guys are taking positive reinforcement to the next level with all this clapping they are doing. Of course they are also the ones in a crowd to stand up and start the slow clap at the end of a really touching speech. They will take any and every opportunity they can to start clapping.
- Someone successfully parallel parks- clap
- Someone finds Waldo- clap
- Someone changes a light bulb- clap
- Someone finishes a Sudoku (only on hard)- clap
- Someone drops food in a public place- clap and laugh
These are just a few examples of places that these people probably clap when no one else would. Bed time. Clap off...
Posted by Nomad at 9:38 PM

I think people DO clap at random shizz, cause I do hear some of my neighbors clapping at random times during the day [not when games are on, cause then you can hear EVERYBODY clapping!]. I'm not a clapper though :)

Genius. You should go into stand up...
plentymorefishoutofwater.blogspot.com/

People clap at the end of movies? Really? How odd...

Someone tests positive for the clap - clap.

Or is that just redundant?

I clap at my television, but I live alone and noone can hear me.

This has troubled me for years! I'm glad you mentioned it. It truly does confused me.

I led a room full of people to applause the exit of a female professional model, who had been showing the room about 5 feet of legs throughout the lunch hour..

I like this article. It is funny to me when people clap at the movie theatre. As if the actors can hear us.

I never clap my hands unless I feel like it, not just because other people are doing it.

haha I enjoyed this - I never understood why people clap at the end of a movie, silly overly enthusiastic people.

However, in reference to ScoMan's comment about, I also clap at my television, if a character does something especially clap-worthy - but I also slap my knee when I find something hilarious, so maybe I'm just crazy.

I'm not a usual clapper, though. =P

One time, I slipped and fell on the cafeteria floor, in high school, as I got up to throw my trash. Of course, this was infront of 800+ high school kids. Guess what many did. Yup! They clapped! Laughter followed, of course...

hey - there's nothing wrong with clapping in the theatre. :) i think i did it once. thanks for the comment. hope to see you again.

You are awesome as is the idea for this blog.
This post is hilarious, and I know several people who clap at the end of movies.

The first time I ever came across this absolutely mind bending occurrence - TOY STORY.. yup, toy story. I was still young enough to where my filter between my brain and my mouth had not yet developed, but I flat out asked the guy next to my why he was clapping, none of the actors could hear him clapping - THE ACTORS WEREN'T EVEN ON THE SCREEN.

I know.. so puzzling.

Funny. JeffyD hates clapping at the movies, but he loves when I clap at TV. And, I am guessing that if I actually pulled off parallel parking, he would break out in cheers for me!

I love pointing out the obvious in a way that you can all relate and still find funny :)... Hopefully next time someone claps in a movie you will all think of me...