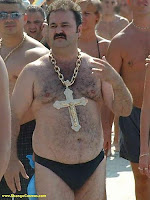 I was looking through some pictures from this summer on my camera today and came across one of those pictures that was funny at the time, but months later you are like why the hell did I think this was necessary to capture on film. Come to think of it about half of the pictures I take are non-kodak moments. I guess in the age of digital cameras we don't really have to be too stingy about what we take, so thank God for that technology. Anyways my inspiration for today's blog comes from a day at Coney Island, I was just minding my business on the beach with some friends when out of nowhere appeared "speedo man".
We all know this guy, the one who invades our privacy by giving up too much of his, no beach on earth is stranger to this fellow. I understand this is commonplace in the South of France or some Greek Isle, but on a Puerto Rican packed beach 50 feet from a fairground and 10 miles from Manhattan, I'd ask that you please refrain from putting the snake on exhibit. None of these guys are J. Crew models either, they are typically built like a mixture of Robin Williams and Mario (no not the singer the one from Nintendo). Old, overweight, underplayed, hairy, and 9.3 times out of 10 Italian through and through.
They seem to find all sorts of reasons to bend over too, or do any sort of stretching while there just to make sure they are noticed. Or they think it will make them appear to have more luggage than typically allowed in the over head compartment. To continue getting as much attention as they can they start doing Yoga there on their beach towel, and somehow end up posed in the "bridge" position for an ungodly amount of time (ungodly and unmanly).
We know they are only wearing the speedo for attention too, why else would they be out on an overcast day, alone, wearing next to nothing, and asking every single girl who passes to lotion them up. If the girls were not freaked out by the gerbil that is trying to escape their pants then they would probably be worried about getting caught in the web of permed back hair.
To Whom it May Concern:
I know you guys are under the false impression that you are gonna be stylin like "the Hoff", score droves of chicks, and then take them all back to your big, circular, rotating, suede bed. But you are more likely to end your day at the beach entering your name in a sex felon registry than with a girl on each arm. This is not the movies Mr. Powers. This is reality, and the reality is that when people walk by and point they are not saying/thinking hey look at that stud, they are saying hey look at that hairy, permed, jackass in the yellow speedo. If people are taking pictures with you it is not because they want to take you home to mom and dad, its because they've just found their new hilarious Facebook profile picture.
So if anyone who stumbles across my blog is a Speedo wearin mofo I hope that you have learned from this experience that we had today. If not, I have included a list of a few places that it is acceptable to wear the short suit. If anyone has any places to add feel free to post them in the comments and I'll be sure to consider adding it to my list. 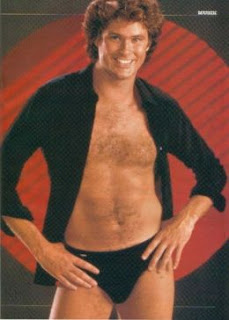 Speedo's, yes, we have Speedo's. Or, as we affectionately call them, "Budgie Smugglers"

We Aussies, we have a comical name for everything.

I think they only other time Speedo's are acceptable is when you are like.. 6. I know in Australia it's common for parents to feel the need to humiliate their kids by throwing them in Speedo's until they're old enough to realize there's an alternative.

People Who Know Me Would Say: said...

Hi Ryan, First, I want to thank you for stopping by my blog and commenting. I like to meet and greet those I haven't yet met and gret.

You're funny, I like the pickle juice idea, and I can't decide which is ickier: The Hoff or Speedos.

I'm not sure whether speedos are acceptable in europe...I certainly dont accept them! You totally don't get people like that here in the UK anyway, which thankfully means I have never been subject to this.

That's right, in the netherlands maybe not UK!

Loving the idea of 365days of people, really cool.

LOL! Yeah! I can't stand watching men in speedos, even if they're real sexy and all. I don't know why, but I find a man in swimming shorts sexier than a man in speedos.

ewwww. ewww eww ewww. Nothing is worse than a speedo wearing fool who forgot to shave.

And I don't even think a speedo is acceptable in the places that you listed.

Brace yourself for an influx of 40+ women who live to crochet and to blog about it.

Oh god, I can't wait to link you to the blogroll on my new site, because EVERYONE NEEDS TO SEE THIS.

WOW---so do they have Speedos in Prison? just wondering.

Please, for the love of God, remove Europe from the list of acceptable places! I can't bear it. It offends me greatly. And you so right about that whole bending over thing they do too..

Does the guy with the cross around his neck also only have one arm?

I know it's wrong to say this, but I think the picture would be funnier if he did.

It's okay-- you can banish me to the corner now. I'll just play with myself quietly.

now I have to go burn my eyes with acid to get those images out of my mind.....ewwwww!!!

There has never in my life been a time when I saw any man in a speedo and felt attracted to him...never.

that picture is form a you tube video, and they refer to him as a guido from jersey.

i hate to admit the fact that i find a man in speedos very sexy. haha... in fact, my future husband will be required to wear them on our beach vacations...

Hi Ryan, Well thank you for stopping by my blog and introducing yourself. I am finding The Hoff, standing by this blog comments box as I try to focus on my comment, quite off-putting. Speedo's are not acceptable in any of the places on your list, but I note that Scoman probably needs to own up to the fact that Aussies loooove them way beyond the age of 6!

I sincerely have to agree with moving Europe from your list. I can already see an army of Speedo-Marios parading here, spreading everywhere.

Although I am writing from Finland, we do have warm sunny summers and beaches. Seriously No Thanks.

The 70's buaaajajajajajaja. I HATE. HAAAAAAAAATE men in speedos/bikinis/thongs whatever the hell!!! Men should wear boxers ALL THE TIME. PERIOD. Unless you know the kinda look like David Beckham and maybe they can pull off tight shorts, but still nothing in the shape of a speedo.

you guys are just lucky i didnt put the picture of me in a speedo up... i hadnt shaved that day.