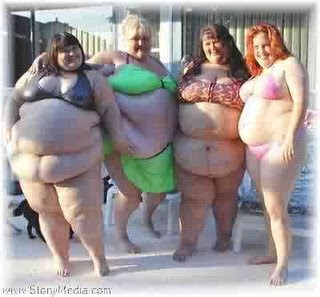 Anyone who is lactose intolerant should not ingest this blog, because there is an unfortunate amount of cottage cheese from here on out. Earlier today I was enjoying a lovely day at the beach when I was forced to witness what would be the outcome of mixing "The Biggest Loser" and the opening scene from "Baywatch". It hurt more than the SPF 50 I had gotten in my eyes just minutes earlier.
There trotting down the beach before me was a woman in a bikini who could make fat Oprah look like Tyra Banks. This woman looked like she could have beaten John Candy in a hot dog eating contest. She was no doubt creating more waves than the ocean, you did not want to get caught in her rip-tide. (Get the Picture????). I will admit I was happy to see her working out, but this is the precise reason they sell treadmills you can use at home, so the rest of us don't have to have a tainted beach experience.
It always fascinates me to see large girls who are so confident, (not that they should not be) it's just odd that we have a world where girls who look like they need a sandwich don't shut up about how fat they are. Then we have girls who look like they ate the other girls running around with the confidence of swimsuit models. (Its probably all due to asshole guys, glad I'm a gentleman). I'm going to try and stay away from the fat jokes for the rest of the blog, for one I don't want to keep imagining her, and two because in this instance they are more fat truths than jokes.
Maybe she used to be 300 lbs. and now that she's down to 220 she thinks she is an American Gladiator and wants to show off her hot body. The problem is that we don't have the opportunity to see the before picture, so to us she is still just fat. Honestly, I wouldn't even be making fun of her if she would have been decent and wore a one piece and some shorts to cover the dairy farm. But, I figure when someone that large is flaunting what they've got they are submitting themselves to be judged. It's only fair, if I have to stop wearing my thong Speedo, then these girls had better have to edit their wardrobes as well.
Posted by Nomad at 10:09 PM

You sir, have an extremely sick, twisted sense of humor. Can we adopt you? You would fit right in this family.

You actually tagged that post with "Cottage Cheese." I'm laughing so hard that I'm about to fall out of my chair.