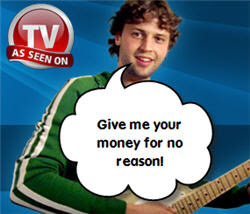 I have finally found the one person who can pass Carrot Top as the most annoying person on the face of the earth. If you guessed Paula Abdul you were warm, but I am actually referring to the ass hat from the Free Credit Report Commercials.
Every time I see this curly headed ear rapist I want to throw a rock through my plasma. The remote can not be close enough to my hand when I hear this guy start singing. I believe he is the sole reason they invented DVR with the capability to fast forward through commercials.
I would rather pay for everyone's credit reports than have to listen to him ruin my mid show breaks.
I heard rumors that Rob Zombie was actually going to use this guy as the villain in his next movie, which makes sense because he often haunts my nightmares. Nails and silverware scraping on a chalkboard is actually a soothing sound after one of these horrific advertisements.
I'm sure that he is not the writer, and I know he is laughing all the way to the bank, but something needs to be done about him. When I have kids I am not going to ground them, I am just going to lock them in a room with this dudes commercials on loop, come to think of it we should just start doing that to terrorists. Enough with cutting off fingers and ears, 5 minutes of this crap and I'll tell you anything you need to know.
Posted by Nomad at 7:13 PM

A to the Men. But thanks for this. No really, I'm blaming you for the fact that I have a bad case of ear herpes now. I've enjoyed your site, btw! Glad I found it!

Any time a pass a TV with one of these ads playing, I remember why I stick to netflix, and forgo the antenna. :)

You are super amusing. I'm happy to read this blog : )