Day 37--- If You Cant Clap Something Nice; Dont Clap Anything at All... 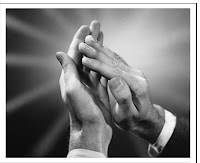 If you've ever been to church or a concert I am certain you have run into this next social outcast. The off-beat clapper. Nothing is more offensive to my spirit or my ears then someone who can not simply clap along.
The Bible says make a joyful noise unto the Lord, I am pretty sure clapping a half step behind everyone else is anything but joyful. It may even be one of the unforgivable sins. There is no faster way to spot the white guy at a traditional southern gospel church then to listen for the late clap. (True he will also be the only one without a big flowery hat and a fan in his hand)
I recently went to a small (non-professional) performance of "The Wiz" and one of the guys in the chorus clapped more off beat then Hellen Keller would have been at auditions for "Stomp". There was nothing I could do to divert my eyes from this guy, he stuck out like a sore arm. He was so into it too, he looked like he thought he was directing the show.
I understand that certain people have no rhythm, but since when did you need to be in Trans-Siberian Orchestra to clap on time? If you have 2 hands you are pretty much guaranteed to be able to perform this operation. If you can at least look at the people around you, you should be able to manage at least one or two at the same time. It is worse than singing off key too, because I realize that not everyone was blessed with the same golden pipes that I was (haha). I'm not asking for you to be able to lead the worship service here people, but bringing your hands together at the same time as those around you has to be a basic human function. Most of the babies of the world start clapping nearly before they learn how to breath, something we have been doing this long we should pretty much have perfected by the time we are 10. If you are the off-beat clapper I want you to know that everyone around you does notice. They dont always look, and they will probably never say anything, but they are most definitely thinking about how much you are ruining the song. So I reccommend that if you catch yourself clapping ahead or behind the people around you for more that thirty seconds that you politely put your hands in your pocket. I have included an instructional clapping video below. Actually, its more for entertainment purposes. Enjoy.

see if you can find a video of a gospel choir where some of them clap off beat on purpose... its AMAZING.

oh my god thats the worst most pointless thing ive ever seen in my life. it never even changed...
I can't believe everyone clapped at the end..
I really like your blog, very funny. keep up the good work. cheers!

I'll have you know that I'm beat-deaf and I find this offensive. I'm Christian and the last thing that I want to hear is that I'm a social outcast and a sinner because of this. I've tried all my life to clap on-beat and I can't do it. Bad blog... watch what you say... you never know who could be reading.