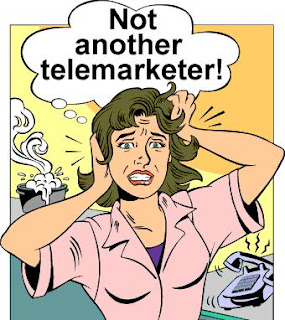 I'm pretty sure my next victims have been called every name in the book, I didn't google statistics, I just know I have used at least 37 different ones on them. Tele-marketers are quite possibly the most annoying people on earth (next to the guy on the free credit report commercials).
How awful is it being mid "American Idol" and having the phone ring. Initially you get excited, because well, getting phone calls is almost always exciting (especially in the text-ual world we're living in). What you hear on the other end of the phone is not exciting at all though.
Typical Conversation:
"Hello, may I please speak with Mr. Holman?"...
"speaking"...
"Hi, Mr. Holman could I possibly interest you in signing up wi-*click*.............."
Did I seriously just waste precious seconds of my life talking to a telemarketer. Almost always our anger lasts long after the phone call, we go on and on about our number being un-listed, and this and that. To where we becoming more distracting than the call itself. I'll be honest, it pisses me off the most when I try and politely decline and they just keep going, like if they change their voice tone to a higher pitch all of a sudden I'm gonna be like you know what I do want to sign up for a new credit card, you totally sold me on it.
Sometimes, I feel like I'm on the movie "Glen-Gary Glen-Ross" or the "Boiler Room" (which is a reference only my dad will get). Just thinking about getting calls from these butt plugs has me angry now. I heard Chris Brown had just got a phone call from a telemarketer before he went ape shit on Rhianna (this is a common term, not referring to how his face looks). I never think it is right to hit a girl, but if the stories are true I can see why he snapped. Tele-marketers make me almost as distraught as knowing that Carson Daly still has his own TV show, even though no one watches it. Its bad. He's not funny. Was he ever funny? Did I miss something? And now I think he he does crack, but like the store brand because God knows he cant afford the good stuff. OK. sorry random tangent, but really?.... Carson Daly, my cat has more humor in his left paw, and the kicker is, I don't even own a cat. But if I did.
Fact (that I made up);Studies show that tele-marketers are the leading cause of bi-polar-ness in our country.
Back to tele-marketers.
At this point we are so predisposed to hating these phone jerk-offs that they could be giving shit away and we wouldn't let them talk long enough to find out. I imagine the average call time for one of them is something like 8 seconds, it is probably harder for them to keep people on the phone than it would be to ride a bull...(that's where I got the whole 8 second thing from).
It makes me wonder if people used to treat door to door salesmen like this back in the ""leave it to Beaver" era. Pre-peep holes and stuff. Did people open the door to see some jack ass with a vacuum cleaner and a briefcase and then just shut it right back in his face. When did we become so rude. Is it us or is it them that are the rude ones? I don't even know anymore. Technically they are invading my me time, which is very hard to come by, so maybe they are the inconsiderate ones. Or is it I, the one who hurls insults and hangs up on seemingly innocent people who just need to do their job. Cant you guys see I am busy updating my Facebook status?... The amazing thing is, I don't even have a land line and these bastards still manage to get a hold of me. Yes, I have caller I.D. but it never says "asshole calling", its always like some number that I think I might know or for some reason I recognize, which at this point is probably because they call once a week.
I wonder what the suicide rate is among telemarketers, that may be an interesting study. Do you think they have to have their offices in some remote area so people don't try and track them down and harm them?(Harm being the least graphic word that came to mind). Do you think the pay is amazing to keep them going? Do you think they get a special bonus if they keep the person on the line longer than 30 seconds, even if they don't make a sell? Do you think telemarketers have friends? Do you think their families still love them? Do you think they even have families? Do you think maybe they were a bunch of foster kids who were bred into tele-marketers? Have you ever met one? (I haven't, makes me wonder if they really exist or if they are just part of my imagination. How high is their turnover rate? How do they know when we are eating dinner? Who do people hate more, postmen or tele-marketers? All valid questions that I'd like you all to ponder. Or answer in the comment area.
Fact (that I made up): Most Americans would rather answer the phone to the guy from "Scream" on the other line than a tele-marketer.
I'm over it, my phone's ringing gotta go.
Posted by Nomad at 2:53 PM

Better a telemarketer than a bill collector!

i was a telemarketer back in the day... it's an impossibly hard job to actually make a "sale." not to mention when they get you to agree to try their product there is a special team of people sitting on their asses paying little to no attention who then have to listen in and record the conversation so that you cant later say that the telemarketer "never told me that" etc... having said that, i have a fool proof line for telemarketers... "im in the middle of dinner right now, but why dont you give me YOUR home number so that i can call you when it's convenient for me to listen to what youre schpieling?? "

seriously, that line doesn't work. Wanna know what to say? Take me off of all of your calling lists please. Sure, some jackasses won't put it through, but really, that's the Only way anyone is allowed to put anything into the computer that may make it not call you. It's a pain in the rear. But saying smart ass comments just means that ONE you may piss off your telemarter making them say here ya go buster, Call Back. Or select the plain old not home option, which just means you get a call back. not interested, call back. everything is a call back except that good old take me off your list thing. Yes I was a telemarketer a couple years ago. It was crap. But better pay than everything else I could get. If you are polite and say you want to be taken off the list they probably will put it in. then again, there are a couple lists, so that means saying it more than once. Thankfully, I have never ever ever had to deal with a telemarketer. but i know what they are required to do. they are required to make sure you get called back until you get what the company paying them wants you to get unless you ask them to take you off the list. Without yelling it and then hanging up. it's so grand. i was so happy when they closed our location (don't worry, still 4 more in the area, it's a hotspot). and yes, i was the nice one not the bitch who kept On and Kept On.

Trying to find the Ultimate Dating Site? Create an account to find your perfect match.