Day 28--- Tribute to Mel Gibson and Julia Roberts. Sort Of. 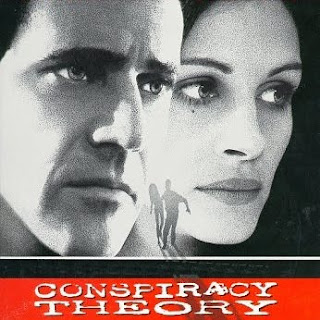 On the anniversary of one of the greatest tragedies in our nation I decided to pick a group semi-specific to 9-11. No, I'm not talking about terrorists, or firemen, or policemen. The group that I am referring to today are the conspiracy theorists. While they have obviously always been around I think with the help of the Internet they have really started to come together and flourish.
My take on them as a whole is not going to be as adverse as I have been with my past few subjects, I'm keeping an open mind. Of course there are plenty of idiots out there whose "theories" about events over the course of history are quite out of whack. Such as Tom Cruise's view on religion. But that's neither here nor there, I decided to do a little research and comment on some theories that I find floating around the web.
To forewarn, I am not making any of these up.
#1- KFC makes black men impotent... Well, I think we all know that if this were true the black population in this country would be next to nothing. Further research shows that KFC is actually owned by a black gentleman. Shock. JK.
#2- The U.S military caused the tsunami in India in 2004... If I remember correctly in 2004 Bush was in office and the man can barely tie his shoes, cause a tsunami, I think not. But, he did obviously cause hurricane Katrina. Once he found out that KFC didn't make black men impotent he had to figure out another way to get rid of them. (clearly I'm kidding, Noland if you ever read this I love you.)
#3- Nazi's had a moon base... Weren't they busy killing people??? And growing really stylish facial hair.
Again I am not making these up...
#4 - Microsoft sends messages in Wingdings... Well finally someone found a use for that shit.
#5- Bar codes are intended to control people... I wouldn't say control, but once they start tattooing them on our necks I'm sure they will help identify us.
#6- Charlemagne never existed, and was a fictional character... Too far back for me to care.
#7- Area 51 is out there and is a real place with aliens and stuff... Woo, so is District 9 but as long as they keep those slimy bastards fenced in we don't have to worry. I don't want them eating my cat food. (will only make sense if you've seen the movie).
#8- Apollo 11 moon landings were fake... Totally not, but if you look closely you can see a munchkin hanging himself from a stage light in the background. (this is one worth looking into people)
#9- The Government killed JFK... I didn't even realize this was still a theory. Plus there are thousands of magic bullets floating around these days.
#10- The government caused, knew about, or covered up 9-11... No way! Fires always bring down 110 story buildings while only burning for 2 hours (if planted detonators go off below). Planes always disappear into holes in the ground or small holes in the side of buildings, (with the same jet fuel mind you yet no lasting fires). We always find suicide bombers alive after they died in plane wrecks. I could go on but i wont. But, if you are halfway interested. Check out a video called Loose Change, its pretty interesting.
Truthfully I firmly believe that Bigfoot and the Lochness monster are part of the Freemasons, which is where they learned how to control the world!... I realize those are Obama and Hilary's code names but I'm talking about the real ones.
I think we all know that there are some bull-crap theories out there and there will always be some follower who wants to drink the kool-aid. At the same time if you look at some of them with an open mind, and not the mind that we are given while in public school. You may find some pretty interesting and factual stuff, like I said before the Internet has worked wonders for "theorists" all over the globe. It certainly makes it harder for the government to cover things up when we can share video all over the world all on our own even if the news channels wont. All I'm saying is have an open mind, oh, and watch out for Bigfoot, he's right behind you!
Posted by Nomad at 11:29 AM

i love you too... id like to take this time to thank Kanye for giving Bush a reason to hate black people... if