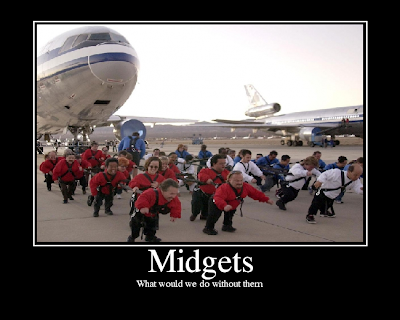 What is wrong with the word midget? It certainly does not offend anyone that I know. What happened to having a "little" bit of fun at someone else's expense. Who says I have to be politically correct? Its not that I mind calling them "little people", I just think the word midget loads more fun to say. Don't you?
I think with the popularity of the show "Little People Big World" it has once again become a novelty to be a midget in the United States. Their first wave of popularity came after the ever popular "The Wizard of Oz", people realized the importance of their role in that movie. Dorothy never would have gotten her happy ass to Oz if it were not for the excellent sense of direction the munchkins had, and the great architectural design of that yellow path. Just when the munchkins popularity was wearing off we had another classic midget movie, "Charlie and the Chocolate Factory", thank God for those silly little Oompa Loompas. Once again these characters shaped the outcome of this classic story.
I don't know about you but these classics certainly make me want to have one of my own. Obviously not own them, but maybe just start up some sort of rental system. I think I could create a little case for them similar to the ones that Paris uses for her little dogs (obviously it would have to be a bit bigger). Or I'm sure that I could design some sort of papoose thing that I could wear on my front or back like some sort of satchel. I know if I had the time, money, and a midgetorium I could make midgets the hottest accessory in 2010.
Lets be honest, they can do all the same things as big people. Well, except ride roller coasters, reach the buttons for the top floors on an elevator, ride in the front seat of a car, change a light bulb, sit in the exit row on an airplane, play major league sports, but none of those things are any fun anyways. They also get to do a lot of cool things that we cant, look up girls skirts without bending over, shop at baby gap, take really funny pictures, get thrown across the pool with ease, work for Santa, stand on things and not get yelled at, crawl out of the back of a booth from under the table without having to have everyone get out, hide in clothing racks at the mall and jump out and scare people, so clearly they have advantages that I can only dream about.
Who knows maybe short is the way God intended all people to be and we are the abnormally large monsters, you know sometimes the majority means all the fools are on one side. (one of my favorite quotes ever! btw-live by it)...
There are plenty of " little people" that have made it "big" in the entertainment industry who can be an inspiration to all. For instance, Joe C the little guy who ran around with Kid Rock, Emmanuel Lewis from the 80's TV show "Webster", Tom Cruise who used to be married to Nicole Kidman, Vern Troyer aka Mini Me, plenty of people have become famous despite their shortfalls. (no pun intended)... (that's a lie, I intended it)
One of my dreams in life is actually to see 2 teams of midgets play tug of war against each other. Or just one team against me, and see if I can beat them! Is that so bad? Either that or go to one of their little conventions and dress up as Goliath, although I wont give them sling-shots, I don't trust them any further than I can throw them. (Which is oddly more than I trust you guys, just due to the size/throwing ratio).
Hopefully no one was offended by this, luckily midgets don't know how to use computers so I know I wont have to worry about them. KIDDING.
Posted by Nomad at 12:21 PM

HAHA that would be convenient

Going along with the political incorrectness, my parents/doctors almost thought I was a 'midget' when I was a kid, I didn't start growing properly until I was almost 6. Unfortunately, I also stopped growing once I hit 5" 1/2'..... I'll play tug of war with you! ;)

Love your blog with all it's lack of political correctness. I'll be back to read more.

i totally laughed out loud (longhand just for you)