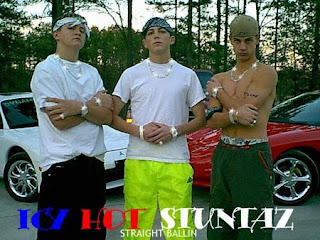 If you are a Caucasian that gets offended easily this is a blog you should probably skip, at least until you have a sense of humor. But if you are as annoyed with white guys in "bling" as I am, read on. I'm sure I'm not the only one who thinks certain accessories are made and meant for certain people. FUBU is a perfect example, if you are not aware FUBU stands for For Us By Us, the owners could not have been much more specific. (This is outside the boundaries of racism and class-ism, this is style and common sense people.)... You don't think John Smith would have run around with Pocahontas's headdress on do you? Of course not because that was socially unacceptable at the time, now its fine, we have crossed those boundaries.
No saltine I have seen has ever looked good with a gold plated Jesus head dangling around his neck, only Kanye West could pull this off. Just like those really cool glasses that look like blinds that everyone tries to wear now (but that's a whole other story). The only two white "celebrities" (term used very loosely) that have attempted to pull off "bling" are Kevin Federline and Kid Rock, and I highly doubt those are 2 citizens you would like to model yourself after. At least I hope not, if you ever hear a young kid say he wants to be like one of them when they grow up just smack them upside the head, for me, and for their own good.
The only time it is acceptable for a white guy to have that much gold around his neck is after a swim meet during the Olympics. All other violators will be towed, at the owners expense. Wearing too much "bling" is really a gateway drug to doing other stupid stuff. If you allow this as a parent pretty soon your son is going to come home with a blunt over his ear, a wife-beater, saggy pants, corn-rows in his hair, trying to act like he is the next Eminem. We all know there is only one Eminem, no one else is slipping through that hole (just ask Asher Roth). There is no way that if you are just a typical dude with a 9 to 5 that you can afford any of the real bling anyways, are they giving these things out in cereal boxes and happy meals these days? Maybe you found it in one of the candy dispensers at the front of Wal-Mart. I don't know where the purchase was made but whoever sold these items too you needs to be shot. Especially if you tried it on in front of them and they told you it looked good. There is a reason that Tiffany's does not sell this crap, because no one with enough money and self dignity would ever buy it. Honestly though, if you can but a big ol' chain on and an iced out watch and look at yourself in the mirror without busting out laughing then your problems may be more than just skin deep. Maybe the big chain is over compensating for something, I'm just saying. If you are a girl who finds this attire good looking and you allow your man out of the trailer dressed like this then you are about 3 episodes away from "Springer". The truth is I can not find enough mean things to say in an un-approving manner, so I'm going to leave you with one last thought that will hopefully scare the Bl*ng out of you. Kevin Federline.