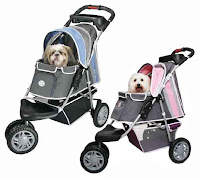 I am aware that I have done one or two blogs that rip on stupid pet owners, but there are some people that are just begging to be written about... I fully understand loving your animal, however as much as you love them they are still animals. This is why I am here to speak out against the morons who find it necessary to push their dogs around in strollers made for children.
As I write this I hope and pray that this is something that has only infected the U.S. and is not something that my blogging friends over seas have to endure... We are a nation in which 8 out of 10 families is so deep in debt that they can probably spend their paychecks faster than they could burn them. Yet somehow have enough disposable income to purchase dog strollers. We are also one of the fattest and laziest nations of the world which you can tell is something we are trying to infect our dogs with as well... Never mind the fact that we dress them up in clothes more expensive than I wear, but now we are actually taking away one of the only things they can actually do; walking. As I have said before, I am an animal lover, I don't support any sort of animal cruelty (other than the typical decapitating or shooting that lands them on my plate. I personally think it is more cruel to stick a dog in a stroller, this is animal embarrassment, how do you think all the other dogs at the dog park view ol' Rex when he rolls up in a Maclaren. You know who is getting pissed on when no one is watching.

You know you live in a backward land when there are people who put their children on leashes and their dogs in strollers. What the hell is wrong with these people, I mean I don't think the dog who just got done eating his own poo, drinking pool water, and then tossing his salad, is going to mind getting his feet dirty on a walk around the block... I could be wrong, but to me this is kind of like if a lady of the night insisted on her John washing his hands before sex, certain things just become irrelevant at that point. As much as these people are unwilling to admit it, I believe that these are the beginning steps of beasteality. First you let the dog kiss you in the mouth, then you dress it up, next you purify its water, buy it a stroller, stroke its hair, take it for long walks on the beach, tell it secrets you haven't told anyone else, give it alcohol, let it sleep on the bed with you, the signs are all there.
When will this madness end? I'm being serious, when are we going to stop treating animals better than we do other humans? I'm not saying they need to be treated worse, but they certainly do not need to be treated better. I think this people need to get a grip and focus on what is important, I mean shit send some money to Africa if you cant come up with anything else. Pay off your debt, find something else to do with all this extra money you have laying around other than buying a dog stroller for a dog that can walk just fine... If you guys don't shape up I am personally going to release a hungry Asian man in each and every one of your neighborhoods, then we will see them run...
Posted by Nomad at 10:54 AM

I can't believe this type of MORONS! I love how they talk about their animals as if they were human: "he loves it when I do that."
When I was a waitress, I used to have a regular customer that would buy a to go home meal for her dog! yes, she would order take out for her Sammy. Mind you, the take out meal had to be special because he couldn't have too many calories. OMG!

Oh, and what about the deranged ones that put a present for their animal under the Christmas tree??? "To: Fluffy From: Santa" LMAO!!!

So I was at the Glendale Galleria last weekend and I passed a small boutique for dogs. In the window hung outfits, fancy collars with matching leashes and strollers. STROLLERS!

What part about WALKING a dog involves a stroller? Doesn't that defeat the purpose? I"m so confused. LA worries me.

All I can do is nod in agreement on this one. It's one thing to love your pets, as you say, it's another to anthropomorphize them. Is this done for the benefit of the pet? I can't honestly think of a single cat or dog that enjoys being wheeled around in what is essentially a box on wheels. And pet clothes...don't even get me started!

"You know you live in a backward land when there are people who put their children on leashes and their dogs in strollers."

This observation is an absolute stroke of genius. And pathetically true.

I'm digging this blog more and more with every passing post.

Every dog I've ever known loves to walk. You take it around the block and it'll run as far as the leash will let it go and drag the owner (which is much easier for a Lab to do than it is for Jack Russel to do).. but you put them in a stroller like this and it takes that away from them.

What kind of idiot seriously thing this is a good idea!? Dogs love to run, they love to walk..This is absurd!

I can't even begin to tell you how many of these I see on a daily basis on my walk to work in New York City.

I actually have a stroller for my dog - but she is partially paralyzed. After a disc ruptured in her back, she couldn't walk very well (she looks like a drunk dog). Since she loves to be outside and is a pain to hold, the stroller with a zippered cover to keep her contained has been a great alternative for a dog who wants to be outside.

Otherwise, I'd have never gotten the darn thing. That might explain why I feel the need to constantly explain the reason for the stroller when we are out and about.

holy crap, i saw a woman doing this on my way to work the other day. then she took out the dog so it could pee. DOESNT THIS DEFEAT THE PURPOSE OF DOG-WALKING?!

Dogs are more loyal, loving, forgiving, genuine, good natured,innocent and pure of heart than any human I know of. Humans have a LONG way to go soul-wise. Dogs are already there man.

My dog is very old and cannot walk the six blocks to the park but she loves being in the park. Maybe a little less judging and a little more thinking outside your own privledged box is in order.

I think there a great thing.. Don't have one, but think that if your somewhere that is not exactly pet friendly... You can put them in the stroller and they are contained. Not bothering anyone!!! Better then the people leaving them in a car....

Animals deserve to be treated better than humans, simply because they are better! Only humans harm for 'fun'

My dog had major spinal surgery. Without the stroller I couldn't have taken her out at all. She is now healed and well but that time was difficult. Why are you so judgmental? Frankly, we'd all be better-off if people had dogs and not children! Who has the smaller "footprint"? The strollers can serve a real purpose for older dogs especially. Most people I see daily treat their cars and lawns better than they treat people. You know what? You are an idiot!!

I have a medical alert service dog... a 7.5 pound Maltese Terrier who is able to detect a medical condition I have and alert me before it happens. With her assistance I am able to get past immediate danger and can leave my home without the assistance of a member of my family. I use the exact same stroller as pictured above. Why you may ask? Because she is a small medical alert service dog, walking her by my side is sometimes hazardous to her. People walking while texting, talking to friends, etc. just do no see her because of her size and accidently kick or step on her. In malls, department stores, or grocery stores, people use shopping carts. Many times they come around the corner and do not see my medical service dog and accidently hit her with their buggies. I use the stroller to protect her while she is protecting me. She wears a medical alert service vest while in her stroller. We also have medical alert tags and badges on the stroller itself. I carry a medical letter from my doctor at all times to validate the need of her services.

Also, some dogs have medical health issues which hinders mobility or just old age itself, but still enjoy being able to go outdoors with their owners. Many people I know use the stroller so that their pets can get outdoors with them. Owners lift them out of the stroller when nature calls and then continue on their walk.

Yes, I agree that if it is a fashion statement then it is a bit much. But for those who have legitimate concerns regarding the safety of their service animals or ailing pets, pet strollers can be helpful.

Once again, I am only posting to help people understand that not everyone uses pet strollers for the sole purpose of being fashionable. Oh, and by the way, my medical service dog walks whenever I feel that she is in a safe environment and always when outdoors unless in a crowded fair.

thank you for allowing me to comment. With best regards to all