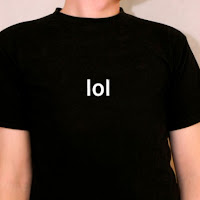 I was happy after yesterdays blog to find out that I was not the only person highly annoyed by Tyra Banks... Thank you guys for the feedback on that one. Today is going to be hopefully someone that everyone can relate to being annoyed by, unless of course you are one of these people. I refer to the obnoxious laugher's of the world who plague my eardrums. If you are not annoyed by these people, you are one of them.
These schmucks bring a whole new meaning to the term LOL, (laughing out loud, for the idiots who read my blog). They are the ones who will break out in a cackle at any point during a story to steal the attention away from the person telling the story... They are the ones that will disrupt my meal from halfway across a restaurant because someone at their table told a joke. They are the ones in a studio audience who hold on to their laugh until everyone else has subsided so you can hear them laughing solo. They are the ones who make un-funny people feel like they should be doing stand up. They are the thorn in my side.
What makes them think that their laughter is so important that it needs to be heard around the world. I'll be the first to admit that I am an attention hog, but I will never stoop to the level of attention whoring myself out with a chuckle. That's just low. I was out to dinner tonight with ma-lady at an extremely fancy restaurant (OK, that's a lie, it was just a really superb Thai place) regardless, it was a sit down place where you had to wear shirts and tip. As we were sitting there some woman across the restaurant started laughing, and I swear would not stop until every head in the restaurant turned to cast their disgust onto her. The thing is no one else at the table was even laughing, she may as well have been blowing a kazoo, banging cymbals, and making out with Lady Gaga, because it was that obvious she was starved for attention. These are the type of people who fake being drunk just to get onto Girls Gone Wild.
I don't know what we could possibly do to cut down the spreading of these maniacs. If the technology is available perhaps we could make a obnoxious laugh collar of sorts. It would work like a bark collar, when the "wearer" laughs/barks too loudly it sends an electrical shock through their body until they learn proper "inside voice" laughter. I don't know its a thought, any other suggestions???
I decided to include a short list of things that you are allowed to laugh loudly at:
1. Me
2. Stephen Colbert
3. Modern Family
4. Daniel Tosh
5. Arrested Development
6. Jim Gaffigan
7. The Office
8. Fat people
9. Midgets (LP)
10. Katt Williams
11. When people fall
12. Ugly kids
13. A promise from Obama
14. Dancing white guys
15. Mullets or rat tails
16. When a waiter/waitress drops dishes/or anything, only if its on someone, other than you.
17. Farts
18. Drunk people
19. Rihanna's five-head
20. Me
21. ANY SUGGESTIONS???
Posted by Nomad at 11:05 PM

I would suggest people falling over be bumped up the list. A lot. And of course, a good Facebook Fail Friday is laugh worthy.

I know for a fact I am not one of these people, because I make no sound when I laugh.. which might be nearly as annoying but only to the person watching me squirm in a silent fit and not to everyone around me.

You know, I don't think I even notice these people! I mean, I hear people laughing but it never bothers me......maybe I'm one of the loud laughers and I just don't know it....

Real laughter is mostly unscripted, though.

I have a sneaking suspicion that I may be one of these people... Only when I'm realllly think something is funny. And I'm sorry! I can't help it!if you try to control your laughter you pee your pants!

I can't stop laughing when people fall, even when I try reallyyyyy hard not to! It's probably why I fall so often -- karma is getting me.

I can't say I have ever come across one of these people, and I honeslty don't think I am one, because I really don't laugh much...sad, I know..but now I will be on the look out for one.

Hey, cool, another Daniel Tosh fan. I'd add Mike Birbiglia and Brian Regan to the list as well.

No football to the groin? C'mon, that should make the list.

you always make me smile. =)

YES. I WILL laugh loudly at Modern Family and Arrested Development (2 of my all time favorite shows). Thank you. I will also laugh at Kathy Griffin and "Community".

I love Modern Family and The Office.

I will add as 21. A guy getting hit on his twins. That always makes me laugh.

The list is hilarious. My favorite is "a promise from Obama." ha!

oops. maybe I laughed too loud at that.