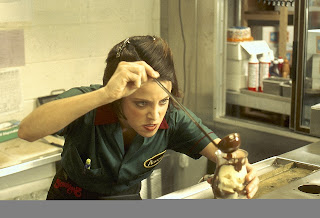 I decided it was time to do another blog inspired by my time in the restaurant industry. If you have ever worked in a restaurant you know that there are plenty of potential people to write about. Today I have chosen one of my least favorite groups of people that dine out. They are the people who go into a restaurant right before it closes and sit forever. There is no worse way to end your night than with a bunch of these douche bags.
I do realize that there are certain events that let out late forcing people to have to be part of the late night crowd. But there is a huge difference between going out to grab a quick late bite to eat, and coming in 2 minutes until a place closes and setting up a tent. If you are not aware, people who sit forever in a restaurant are called campers, hence the tent reference and about a million more that I have coined over the years.
Restaurants do not like campers during the middle of the day because it slows down our table turns thus causing us to make less money. So if we dislike the people who do it during the day you can only imagine how much we despise those who come at the end of the night. This is one of the things you just cant avoid while working in a corporate restaurant, if it says open til 1 am on the door, then you can guarantee they are letting people come in up until 1:01... No joke, I have had people walk in literally as the clock hit 1 and sit in my section until 3 in the morning. The worst part about it is, the clientele that come in this late in the night are also not the most gracious tippers, they are usually quite the opposite. They will come in, sit for 2 hrs, make me sit around earning my $3.63 per hour, they spend $80 making my tip-out portion about $4 and then leave me $2... So if I would have dodged these late night eaters, I could have left at 1 with $200 in tips but instead im leaving at 3:30 am with $198... You cant make stuff like this up, this happened to me and my other server friends ALL the time, but I guess thats what happens when you work in Times Square.
This is why servers will pay or convince the hosts not to seat them at the end of the night in most places, if we thought we were gonna make money by taking the table im sure more of us would be willing. Unfortunately its easily 8 out of 10 times you make nothing extra, and 5 out of ten you actually will lose money by taking one of these late tables.
Here are a list of ways to tell if your server is trying to get you to leave:
1. They are cleaning every table around you and being as loud and as noticeable as they can.
2. They come and sweep near you or even possibly under your table. (we hate sweeping, its just to annoy you)
3. We keep coming to ask if you need anything else. (We dont want you to order anything else we want you to leave.)
4. We send other servers to check on you.
5. We drop the check off and say "take your time". (Take your time is code for--> get out.)
6. We have the managers turn the music off. (When this happens you know you've overstayed your welcome, even to the managers)
7. We turn up or down the lights. (Whatever is opposite to when you came in.)
8. We stare at you from a distance, and look at our watches once we catch your attention.
9. If it starts to smell bad, it means we are crop dusting you. (Farting while walking by)
10. If we ever at any point try and down sell you rather than up sell, or talk you out of something that takes long to cook even if it is more expensive. (Means order something fried and get out.)
So the moral of the story is that if you are forced to dine late at night, make sure to do it in a bit of a hurry, and always leave a good tip. Unless the waiter is crappy, then tip at your discretion. If you can't adhere to those 2 rules then I am sure there is a 24 hr McDonalds somewhere that will cater to your type.
Posted by Nomad at 9:01 PM

Wow these people are just rude. The "the whole world is only there to cater to my every whim and fancy" type. The "I'm entitled to do as I please and you work around ME" type.

If it got to 15 minutes before closing time and people were coming in to the place my brother used to work, he'd either tell them the cook had gone home, they'd just turned all the ovens off and they take half an hour to fire up again or the ovens broke five minutes ago.

ohhh I can totally relate. I use to work at the Olive Garden lol

An authentic view from the dining room and the kitchen.

I was a waitress for 3 years. I understand this post exactly. I did the sweeping thing, the loud cleaning thing--all of them, except for the farting. I can't do it silently.

When my husband and I are out dining and sit there for three hours or something, we tip 15% of our total X 3. Depending on the hours that we stay. We usually compensate for the time we stay there. We understand that the longer we stay, the less tables our server will get.

As a former waitress, I know better than to be rude and nasty to anyone handling my food. =)

I've probably been guilty of camping. But the list is dually noted...

Nothing worse than clueless a-holes who think the world revolves around them. At what point is it acceptable to "spike" their food?

THANKYOU for this post!
I used to get customers like these at the ice cream shop I used to work at - the tubs would be closed, POS turned off, all but one table brought inside....and in come a group, who taste test every flavour and stand there about half an hour deciding. And then eating. And then finish eating, and sit and talk for even longer . And the leave they're slobbery rubbish behind.

So glad I don't work in food anymore!

moral of the story- dont f with people who make your food. or have control of it at any point in its life.

Get daily suggestions and methods for making $1,000s per day ONLINE for FREE.
GET FREE ACCESS INSTANLY

Anyone else wants a FREE MC DONALD'S GIFT CARD?