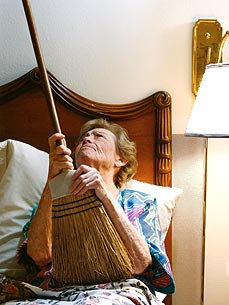 Today is a blog that will only relate to those who have either lived in an apartment building, a 2+ family home, or anywhere that you have had someone living above you. This is of course because the group that I am bringing into the spotlight today is the "upstairs neighbors". Someone had to do it. I realize that not all upstairs neighbors are as heinous as the ones that I am calling into attention, but I'd say its a good 79.973% of them, sorry if you are a quiet upstair-er.
How is it that everywhere I have lived I have managed to live below either a herd of elephants, a construction worker, or the entire cast of "Stomp" ? I swear to you I have never lived where I actually had to guess which room they were in, since they pretty much always run from room I have a pretty good idea where they are and what they are doing at all times. I have always imagined it would be a fun game to try and guess where your neighbors were, I've been deprived.
This was the worst when I lived in NYC, holy crapfest, first of all I lived in midtown Manhattan, where for $2,000 a month you get a very small one bedroom place. So if my ear sore from the floor above was home, I could pretty much hear him where ever he was. It's not like I could hide from his ruckus by changing rooms, when your apartment is only about 250 sq. feet big there are not many places TO go. The dude who lived above me was some little Asian man, but you wouldn't have guessed by listening, as little as he was he made up for it in loudness. To this day I do not know what he was doing up there at 7 or 8 am everyday, but it sounded a hell of a lot like sawing. Sounded like he was building the Ark up the there, or having his own version of extreme home make over. Now, I don't know if he was actually sawing, but I mean, I know what a saw sounds like and I still have not come up with a better explanation. There were other days where it sounded like he would just pace back and forth, for at least an hour without stopping, our apartments were only about 22 feet long total, seems to me like it'd be just as much exercise to walk around the block once, but apparently he didn't. I mean, I would have understood if he wanted to practice Karate or something like that, but the pacing and the sawing really got to me.
I am now visiting my girlfriend in Milwaukee (represent!) and her upstairs neighbors love vacuuming, and by love it, I mean they looooove it. The strangest part about it is that I'm pretty sure they have wood floors, I think I am going to get them a Swiffer Wet Jet for Christmas. I think they may also have races up and down the hallway, there is no conclusive evidence at this time, maybe they all just like to go for power walks like my old neighbor.
For once I want to be this upstairs neighbor. I want to be the one that causes someone to stand on their bed and bang the ceiling with a broom until I shut up. I want to be the one that someone writes a blog about. I want revenge... Well, I guess its not really revenge unless I somehow get to move into the apartment above them, and then I don't think it would be worth it after I have to climb that many flights of stairs. I guess if I did it to someone else, that doesn't really fit the eye for an eye theory, that'd be like if you took my eye and I went and stole some random persons eye, oh man they would be so confused wouldn't they. ha ha. (You just lost I.Q. points for reading that.)
You know what else I could do, I could cut a hole up through the ground while they are gone one day, and then cover it with cardboard and leaves, wait maybe a rug would work better, I'm used to doing this outside... It works ladies and gentleman, I'm gonna feel like Kevin Mc Callister when they come crashing through and land in my living room. I wonder if that would screw up my chances at getting my deposit back. 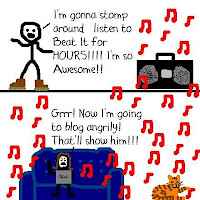 Its really annoying when they still do it after you have had a polite conversation with them about it too. Well, even though that usually comes after the broom banging and the passive aggressive notes left on their door, but still. Disrespect.
I guess that about covers it. Does anyone have anything to add? Any loud neighbor stories? Scoman come on, don't give me the live alone bit again, unless you are out in the middle of the forest you must have had some experience with these guys.
PS. I stole this picture, thats not really me. I don't have a blue couch.
Posted by Nomad at 11:13 PM

I have a neighbour through the wall that coughs a lot. But that's not her fault. She's 70 and has been smoking for years.

What I hate is the ones over the fence who play loud, shit music everyday. During the day I can turn the TV up but when I'm tired and have to work and they keep me up, I want them dead.

I've lived in apartments many times. For the same reason you mentioned, I always made sure I lived upstairs. Although, there is nothing I could do about the neighbors next door who would always have very noisy sex. Their bed board whould actually bang against the wall that was between us and them.

My upstairs neighbors are two ooold ladies who, somehow, are constantly moving furniture around. Chairs, tables, dressers, you name it. And dropping stuff which makes this weird, unidentifiable metallic noise (as if they were dropping giant screws and nails?). And one of them insists on wearing heels around the house. I haven't even been granted the polite conversation because they're so old and paranoid they wont even open the door when you ring the bell - they just talk through the door. not cool

our upstairs neighbors weren't that loud thankfully. What they would do is stomp on the floor and yell at Us to quiet down. We think they laid on the floor and listened to us, cause they'd do that even when We could barely hear the words to the movie or were talking normally. It got to the point where we just lived our lives, our downstairs neighbor rarely had a problem and when the upstairs guy banged we turned stuff up for about 2 or 3 minutes. Downstairs was a friend & was cool with it.

First of all, Ilove your blog!! every post is so funny and true, I look forward to it all the time...Now on loud people upstairs I am currently experiencing that. It always soounds like stomping and it seems like they are always awake!! ALWAYS!! It can be 2 or 4 am and I hear the water running or walking about, they alos love music on the weekend, loud thumpy hip-hop music!! To top it all off they love to FIGHT!! THey argue at all kinds of hours, sometimes I wonder if I should call the cops, but I am too scared to get involved somtimes, at least I am glad I have never heard them "make-up" Thank God!

I've only been in that spot once, for about two years, and our upstairs neighbors had three kids who, I'm guessing, were practicing for whatever Cirque du Soleil show has pogo sticks in it.

I can toatally relate! I live in Laguna Beach in an old duplex. When I first moved in I heard EVERYTHING.. even the toilet flushing upstairs!

After a while I got used to it, but you know what really helped? Watching Slum Dog Millionaire. I will never complain about apartment living again. Ok, that's not true. I will but I will not feel good about it. :)

I have this problem right now. And yes, I too have written a recent angry blog about it. It happened in college too. I call them the "Monsters In The Attic (or room above)". It's truly effin annoying.

In college, I would hit the ceiling repeatedly with brooms, sneakers, weights, leave notes on the door, wait until they fell asleep then bang on their door and leave before they woke up. All in the sweet name of revenge.

These people truly suck and deserve more than on revenge-bashing article.