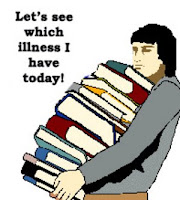 Today's blog is inspired by one of the most annoying groups of people on the face of the earth. I don't know if their "sickness" is something that is all in their head, if it's something they can control, or if it is out of their hands. But I do know that it annoys the shit out of me, in other words, it makes me sick. The people that I speak of are the hypochondriac's of the world.
I will admit that I do know that there are people out there who have this as a serious illness type thing, however the thought of them still annoys me. I speak today more specifically of those people we all know who do it more-so for attention. You can argue with me all you want, but we all know that these people exist.
They are the ones who love to create something from nothing. The ones who turn a headache into a tumor, zit into skin cancer, and a stomach ache into internal bleeding. The most annoying part about it is not necessarily the worrying, because I guess to an extent everyone worries these days with all the potential diseases out there and what not. The biggest annoyance is that it is always something new with these people, they are always in pain, they are always sick, they are always taking some new medicine when all they seem to have is a runny nose. Someone needs to keep these people away from Grey's Anatomy and ER. There are only so many times that you can cry wolf before no one will believe you any more, and one time crying wolf around me is enough. This is going to sound sexist, but I feel like this type of person is typically female, I think they do it to get attention from guys, (if they are the faking type). New Flash Ladies: you can pretty much do nothing and get attention from guys, and if you are using this route it is going to get old very quick, trust me I have been on the concerned guy side of this in my past. After months of whining about nothing you are hoping that their is actually something growing inside them just so the bitching can be justified... OK that's a bit harsh, but you know what I mean... I think they are in the same category as the girls who cry for attention or the the ones with perfect bodies who say they are fat just to get compliments... Before you un-follow because you think I am sexist don't think I don't hate on plenty of guy groups just as much, males have a pretty big lead in the rapist and pedophile categories. I mean, its pretty hard for a female to be a pedophile since we all know to be legit they need mustaches...

If you are a real hard core "hypo" (i shortened it for typing convenience, but then ruined that by adding this parenthesis'd area), anyways if you are a hard core hypo then you are borderline insane, There is barely a difference between them and a paranoid schizo. The ones who think that a little bit of gas is an alien growing in their stomach, or the ones who think that a new freckle is the mark of the beast. Please calm down you are driving the rest of us crazy.
Who is to blame for the over abundance of disease paranoid people out there today? Is it the government and all of their new disease scares and vaccinations? Is it the access to Web MD on the the Internet, that makes people think that they can diagnose themselves? Is it all of the medical TV shows that have taught us common folk terms we never would have known in the past such as anaphylactic shock or ventricular fibrillation? Is it the 25 seconds worth of warnings in a 30 second commercial for every new product on the market? Whatever it is that is causing all of these people to constantly think they are dying, it needs to stop, because I can not pretend to care any longer. We all cough, just cover your mouth and move on with your day. :)
Posted by Nomad at 6:23 PM

I know in my mum's case it is her father that is to blame. Where he gets it from I don't know.

I guess it's contagious.

Yikes, so far, I haven't had to deal with hypos. Thank God. I hope I never meet one. Or worse, turn into one myself.

I try to avoid Web MD most of the time, because that site will get you worrying that you have something way worse than you really have, if you have anything at all.

There's a girl on my Facebook who does this EVERY DAY and updates her status with how sick she is, visits to the doctor, etc. INSANITY.

My boy used to be like this a bit. Thing is he's really sensitive to stuff so if he thought he was ill it'd actually make him ill (or iller). Bit of a bad vicious circle, luckily he's out of it now.

I had a hard time keeping up with your parentheticals. I think I must have dyslexia.

I once read about the idea of the pharmaceutical industry selling a 'wonder-drug' known as Placebon. All the drug companies could take turns marketing placebos curing all the hypos. Maybe I should do this before the big drug companies think about...

I do not personally know anyone like this, but I blame google and the internet, all this seld diagnosing that you can do now and days lol....Loved the post like always.....