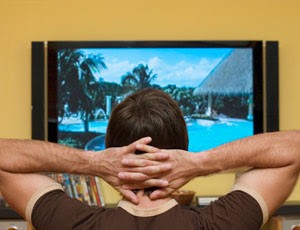 Today I am dealing with yet another group that thinks that they are better than everyone else, similar to vegans, Tiffany employees, movie critics, and Kanye West. They walk among us on a daily basis casting their judgey stares and turning up their noses. I am referring to uppity bastards who claim that they NEVER watch TV. I am aware that some of my readers may be bookworms who stay away from television as much as they can because they think it rots the brain. So if I have a few less followers tomorrow I guess I wont be surprised, but considering the fact I still have about 300 of these left to write, I'm sure I am gonna offend more people along the way. With that being said...
Undoubtedly we all know, or have met someone who when the topic of TV shows comes up in conversation will look at you with disgust, like you just mentioned that you like watching animal porn. They will follow that by biting on the tip of their bifocals and utter something along these lines of, "oh I don't watch TV, there is never anything good on and all it does is rot your brain anyways." Maybe this BS excuse worked 20 years ago when there were only 3 channels that came in, and you had to choose between M.A.S.H, the news, and that white dude with an afro who was always painting (who by the way has never sold a painting in his life). I will allow you to be too good for TV back then, but no sir, not these days. Not in the days where basic cable alone comes with 50 channels, there is ALWAYS something you can watch, truth be told even the Public Access channels are better than M.A.S.H.. (Did anyone watch that show? When I stayed home from school and all that was on was that piece of shit and soap operas I would have much rather been at school).
But back to these non-TV watchers, I know that most of them also like to claim that books are the only entertainment they need but as entertaining as books are, this is just nonsense to me. That's like a blind dude who says he doesn't want to listen to music because he really enjoys reading braille and fingering those little bumps is enough for him. I understand that books are great, most of the time even better than the movies they are adapted into, but these two things are allowed to cohabitate books and the tele are allowed to live under the same roof condescending librarian lady. Don't try and use the excuse that there is nothing on for you, they have literally produced channels for everyone these days, so you have no more excuses. If you are a hard core nerd you've got the Discovery, Health, and History channels, if you are an adult stuck with a child's mind you've got Disney, Nick, and Cartoon Planet. Sports lovers have ESPN, women have Lifetime, and gay people have Bravo. Teens have MTV and Vh1, funny people have comedy central, and mexicans have Univision or Telemundo. You could not possibly want to read a book with this type of a selection at the tip of your remote. With the invention of DVR TV is even better, you don't even have to be home to see the shows that you love, so you can watch what you want when you get home from your book club meeting.
I have no problems with people who love to read, I have read a book before, and it was a decent experience. You can learn a lot from reading, and even if you are not reading just holding a book in your hand makes you look 9.56% smarter. So it is not the book lovers that I am directing this at. I just have a problem with people who think that they are better than me because I like to watch an unrealistic show about high school kids in a glee club. I don't judge you when I see you reading a book about vampires, OK yes I do but still...
The invention of the TV is almost as impressive as the wheel and you cant deny that. I mean, if they would have made the television before the wheel we probably would have never even needed it, people would have been just fine sitting in their caves watching Moses part the Sea on the news, or watching gladiators on the sports channel, I bet you Jesus might have even had His own Reality Show (the original "survivor")... Where am I going with this? I don't know, this blog could have been fine with a few personal jabs at non TV watchers and here I am lost in the pre-historic/biblical period. Wow. I guess that's what TV will do to ya... Brain rotted.
On that note, I'm gonna leave you with a list of 10 shows that you need to watch, that is of course if you are not too good to turn on the ol' boob tube:
Dexter (serial killer cop who kills serial killers, brilliant)
Weeds (mother of 2 who sells pot to survive)
Californication (writer in LA, umm and lots of sex)(and no I am not sponsored by Showtime)
Heroes (A show about super heroes among us)
Greys Anatomy (doctors, sex, and drama)
Modern Family (just plain funny)
Arrested Development (brilliant comedy no good way to explain just watch it hulu.com)
Lost (I'd like to tell you what this show is about but I'm not sure yet)
The Office (our spin on the British comedy set in... you guessed it, an office)
Shark Tank (a show about inventions and investors, I love love love it)
Rob and Big (if you just want to laugh and not have to think)
Posted by Nomad at 9:32 PM

I work both reading and television into my schedule. Thats probably because I'm single and live alone and therefore have a lot of free time.

Dexter the book is probably not as good as the TV show, but it's still a good read. I haven't read any other TV books so thats the only comparison I have.

Anyone that says there is never anything good on tv is either blind or stupid.
Most people have access to at least a few free cable/digital channels nowadays, if not the full shabang - therefore opening up their viewing abilities to some of the best documentary series, comedy shows, and news channels in the world.
Television can be wasted and there is alot of crap on there....but by god it is incredible if you know what to look for.

I totally agree with you. I don't even know what to say when I meet a person who doesn't own a television.

I love The Office and Grey's Anatomy.
I love TV and books.

You're right, TV and books can coexist!!!

Hahaaaaa....Bob Ross. My brother has a white boy fro exactly like his.

i like TV more now that music stations are available.

Oh! I hate those people too! I love a good book, but TV rocks.

Also love Weeds and The Office?

Seinfeld and Curb Your Enthusiasm... all time favorites!

Um...I don't watch a lot of television shows...although that's because I generally watch movies instead and don't have the time or inclination to follow a continuing series. Also more channels doesn't equal more quality as a rule.

That said this was a very funny and entertaining post - better than tv!

But how on earth you can miss off Mad Men from your list is beyond me?

Bob hope??? LOL that was my homey when I was little!

Tv... hmmph.... Tv... doesnt exactly suck but it isnt great either. All there seem to be on TV these days are Reality shows and I.CANT.STAND.THOSE! I hate.hate.hate them! Other than that, the sitcoms that are barely there are ok, not as good as they can be. This only reminds me of why I watch reruns and repeats. Its a good way to watch TV and not have 2b what the rest of the world is most likely watching.

Dude, this is some great stuff. Hilarious writing. The "I don't judge you for reading vampire books, okay yes I do . . . " line was killer.

Consider me a fan.

I do love making time for t.v. specially shows (series). Gives me something to look foward to. Yes I know I have a simple life lol

The Office, Californication & Rob & Big are on my never miss list. I actually quote Rob and Big on a daily basis. Do work son.

haha, I can be that person, but I'll laugh at myself for being out-of-touch instead of condescending. I pretty much only watch TV shows on DVD well after they've come out.

Thank you oh so very much for writing this. This is just like my Pet Peeves post. As the little hamster from the movie "Bolt" would say, AWESOME! ;)

There's people that claim to not watch TV? Sure most of it sucks but there's some great programming on.

I have met many of these. Also the parents that don't let their kids watch any tv EVER...wtf. I love Dexter it is amazing also The Office. my guilty pleasure is any of those crazy house wives on bravo.

amy- BOB ROSS! thanks so much i totally forgot his name, i think i need to be him next halloween, maybe i can borrow your brothers fro.

let me add 30 rock, and the first season of flight of the conchords to the list.