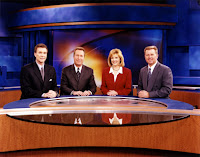 Today is one of those days where I just feel like curling up by the fireplace with a carton of ice cream and watching Sex and the City and not having to be creative. But since I know half of you guys would probably hang yourselves without your daily dose of my crap I'll pull myself together and make the ladies wait for another night. As you have learned over the past few months there are clearly a vast amount of people that annoy me in one form or another. Today I am going to introduce you to a small group of individuals that are will definitely make the top ten for the year. Newscasters.
If there is one set of people that I just want to punch square in the face it would be this smiley bunch of morons. First of all, I don't really like the news in general because these days it is never any good news, always some new disease or someone being robbed or killed, not the type of news I want to be given. Especially not when it is being delivered by some bleached toothed, slick haired, clean shaved, suit wearing toolbox. I honestly cant put my finger on what it is that irks me so much about these people. I think part of it has to do with how fake they seem, and fake people annoy me. Most of them just seem like empty shells of human. It might also have to do with how smiley they are, even when they are giving bad news they just have those big smiles on. Maybe its that some of them will try and make their own little jokes after they say something and they honestly never seem to make me laugh. Maybe it's that they usually have no idea what they are talking about on most given topics, they just read the prompter. It's pretty sad when the smartest guy in the room is the one talking about sports... Maybe its the voices that they talk in to deliver the news, I cant think of how to describe it via blog, but we all know what I am talking about. Maybe its because I feel like one day the government will use them to try and brainwash the masses. I don't know exactly what it is, but I hate them.
I would almost venture to say that I have a fear of these robots, maybe it is an irrational fear, but so is the fear of cotton swabs, and I've seen that on TV before. I feel like these are the type of people who act all happy in front of groups of people but then one day they snap and murder their entire family. Their job is like being stuck in fame purgatory, because they are seen daily by thousands, maybe millions of people, they would be recognized in public, but no one really cares. No one wants an autograph, no one is texting their friends pictures of them, its like you made it, but you didn't really MAKE it. Their lives are like a constant one hit wonder of TV form. They are informational not entertaining. They are to their city what the kid who read the morning announcements was to an Elementary school. People knew who you were but they didn't care. Maybe I am the only person in the history of the world who has thought this in depth about how much they suck, but that's what I do I guess. Hey, I mean they did make a movie called "The Weatherman" with Nick Cage, if a weatherman is noteworthy the newscaster should be too. True, it was Nick Cage so probably not a whole lot of people cared. 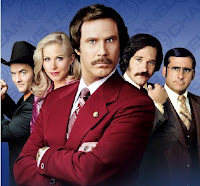 I know the movie "Anchorman" was a joke, but I feel like the way Will portrayed their lack of common sense and their shallowness must have been pretty dead on. Perhaps I have just lived in places with really douchey seeming people, maybe there are some really swell news-givers out there who are as normal as a buttplug at a Cher concert. Maybe I have just been cursed with the annoying catch phrases or personal slogans. But if at least one of my readers agrees with me then I'll consider this a success.
Signing off
Until Next time
peace in the middle east
and thats the way the cookie crumbles
Just the way you like it
Ryan.
Posted by Nomad at 11:45 PM

The Weatherman stole two hours of my life and I'll never get them back again. It was a total waste of time - maybe this is the intention seeing as anyone who wants to know the weather anyway can just google their city. I dislike newsreaders too, although the British ones are slightly more acceptable and seem more "human" in that they'll crack jokes and make appearances on major sci fi shows and movies (Shawn of the Dead) maybe because people take British accents more seriously?

Newsreaders here also seem to have a competition to see who can say "Australia" the most. That annoys me too.

But when they gave three comedians here their own news show I started watching that. They show a bit of the bad news but focus more on good news. It's news the way it should be.

The news in general sucks. Have you noticed how they'll ignore a positive story in their own town in favor of some catastrophe that takes place in a tiny town 3000 miles away?

so glad you decided to post anyway.. because I would have totally gone insane without my daily dose :)

you clearly must have gotten the newscasters from the New York City stations. Those guys are seriously a bunch of tools.

Haha, love that part where the newscasters snap and murder their whole family! :D

I agree that nobody really cares about them, even if everybody knows them. That's sad.

I don't watch the news. But I don't hate the newscasters. I just really don't care about them.

If it ain't bad news, it won't bring ratings, so they stick to the bad news for the most part. I don't like the news, either. Most of the time is biased, anyway.

Did you see the video on Youtube about the lady who puked while giving the news? It was somewhere in Europe. She puked, cleaned her mouth, and continued giving the news. Now that's dedication right there. LOL

Anchorman is my favorite movie! :)

still trying to find a video of the milwaukee anchor woman with a fake hand.....sooo hard not to laugh at