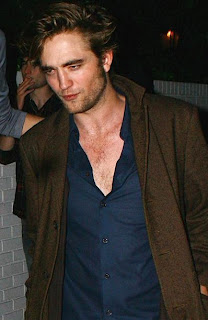 So now that I have 100 straight days under my belt it is time to stop patting myself on the back and move on towards the next 100 day hurdle... As most of you may already know its not the writing everyday part that is so grueling, but it is the coming up with fresh funny material... While I try and put out a new stroke of genius each day ousting some sort of social misfit, you guys are not always going to agree. But as long as you keep coming back for more, I am happy. Like I mentioned yesterday I'd be switching Celebrity Sunday to Monday for this week, so here it is... Robert Pattinson, don't try and fly away, this is your week in the cross-hairs.
Let me start off by saying that I really don't care much about this guy, but the fact that "New Moon" passed "The Dark Knight's" single day record is appalling to me, so I am gonna do what I always do. Make fun of someone I know virtually zero about in order to make myself feel better for something I can not fix. Honestly, I cant go and attack this guy's personality, partially because I have not seen a single interview he has done, and partially because he seems void of a personality worth commenting on... As far as his looks, I'm really just concerned about the health of his hair, I have heard that it is not good to wash your hair everyday, but this dude has taken this bit of information to the extreme, he looks like he is preparing to reprise the John Travolta's role from "Grease", (that was not intended to be hilarious, just a straight forward plausible possible probable explanation for the state and condition of this guys hair). There has to be some sort of health code violation going on somewhere in there, whats more disappointing is that Kristen Stewart doesn't seem to mind, what does that say about her sanitation concern?
Why is he always moping about like one of his emo fans? I'd be upset as well if I was as shite an actor as him, but luckily for him the people who've watched his movies could care less. Dude you are a millionaire, smile, show that lovely British grill. I understand the idea of falling in love with a character in your favorite book and then being excited once they make it into a movie, why else would I own Jesus Christ Superstar? At least Jesus had talent, I mean I saw "Twilight", Robert's acting is just awkward, the whole time he was on screen I had that feeling you have in a dream when you know that you are naked at school but there is nothing you can do about it... I have seen better acting in cartoons, but I guess when your target audience has never seen a movie rated higher than PG or one made before 1998 they are a bit less judgmental than I am... In his defense I thought he did a superb job in Harry Potter, well, at least I enjoyed watching him die at the end. All I can say is thank God for werewolves, because I don't think I could take another movie solely devoted to this sparkly version of Dracula. I guess that means I'll be going to the newest installment, I'll be sure to update you on my feelings toward his acting after that.
My hope is that once there are no more vampire roles for him left to play that he will crawl back into the hole that he came out of... If he does not I do fully intend on following him around with some garlic, a cross, and a stake, just for a photo op of course :)...
Fun Pattinson Facts:
Owns the rights to the sparkle make-up he wears in the Twilight Series.
First person to need the Twilight books on tape because quote "it was too advanced" for him.
Washes his hair with peanut oil and Febreeze.
Was quoted saying he was glad to finally land a non-fiction role (Twilight) after finding out that Harry Potter was not a true story.
Is actually not dating Kristen Stewart, he just makes out, goes on dates, and lives with people that he babysits.
Learned how to act from watching "The Power Rangers" and "Sesame Street".
Thinks that he will live forever now that he plays a Vampire on TV.
Sleeps in a coffin.
Posted by Nomad at 6:50 PM

thank you for starting to chip away at the almost universally held myth that ts guy is attractive! he looks like he hasn't showered or seen the sun in days and i don't get why all these girls are going crazy for him. maybe i'm strange for expecting personal hygiene?

2 things. 1 I AM IRATE that this damn movie overtook Ledger's movie. (You see the fact that I used Ledger rather than Nolan AND the firector dude who I cant seem to remember his damn name right now...) 2ndly! This man is not attractive. If I were to pass him by in the streets of NYC, hed be just another guy. There is nothing about him that I find cute or attractive, I dont know what these girls are going after him for. I may not like the girl that plays Bella but at least shes cute.

He'll be playing the vampire role for the next 300 years!

I'm lucky to have never seen a Twilight movie (free will and all that) but this guy does seem like a bit of a tool.

ugh! i hate robert pattinson, thanks for knocking him, though i can hear tween hearts shattering everywhere. i dont find him attractive, just creepy.

He REALLY annoys me.
1 - He is like a British icon now, thats not cool. I dislike that he is a representation of me and everyone I know
2 - He is a bad actor in Twilight. I like the books, I liked him in Harry Potter, but noooooo to Twilight. Ok film but not "AMAZING" like so many people seem to think.
3 - Girls love him....why?!

Noooo.. not him! Don't you touch him!

I know absolutely nothing about the Twilight series, but since this Pattinson guy looks like a complete douchebag, I'm glad you went ahead and skewered him.

Never read the books. Saw the first movie..it was ok.