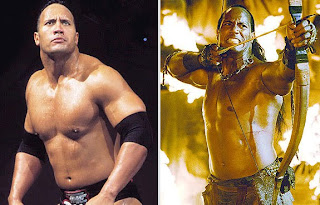 Welcome to the 3rd installment of celebrity Sunday... Where I remind you how human they really are, (except Tom Cruise of course, he is more alien). Today I decided to talk about "The Rock" Dwayne Johnson a little bit. A man who has no doubt lost a portion of respect from the masses, but he is padding his bank account with their lack of respect, so dont cry for him.
I understand with the economy as bad as it is that people need to get a second job to supplement their income. Its just a little funny that Dwayne has gone from being "the People's Champion", a well respected professional wrestler who spoke of himself in third person, to the largest (based on body size) Disney star ever. His first few movies allowed him to keep his bad boy appearance that he built in the ring. In the Scorpion King he used swords control the pyramid lands, in The Rundown he ran through the forest and punched things, in Walking Tall he was an ex marine that saved his whole town from the bad men who tried to take it over, and in Doom he used futuristic guns to mow down demon people.
Then Disney got his number and turned him into a big teddy bear, in The Gameplan he was a crappy dad/football player who had to learn how to take care of a little girl, in Race to Witch Mountain he played a taxi driver who basically spent the whole movie being protected by two little alien kids, and in The Tooth Fairy, you guessed it, he is the tooth fairy... At this rate his next movie is gonna be the sequel to Brokeback Mountain. I can only imagine what his old nemesis Stone Cold Steve Austin will be thinking when they see him floating around on screen in wings and a tutu.
I have to admit I have watched most of his movies, and I cant say that I have hated them, but he is certainly not going to receive any awards for his acting ability any time soon. If he does it will more than likely come from the "Teen Choice Awards" or from MTV, and chances are someone/Kanye will probably show up on stage and call out someone more deserving. We all know pro-wrestling is acting anyways so the transition to acting in films really is not that shocking. I guess he was pretty smart to change careers when he did, especially when considering the 1st 3 movies he was in made him over $30 million dollars. Impressive.
While researching a bit a bout him I found out that he was not all that interesting, IMDB is great for uncovering all sorts of facts about people.
- Has a fear of spiders. (puss, hopefully Disney doesnt have any spider villains in his upcoming flicks)
- In his first semester at the University of Miami, earned a .7 grade point average. He was majoring in criminology. (apparently you dont have to be smart to be successful)
- He was offered a promotional deal with "Dunkin' Donuts", which would have seen the company name a donut after him. Thinking it would make him appear big-headed, he graciously turned the offer down. (and I thought he was a sellout)
- Was Tim Burton's second choice for the role of Willy Wonka in Charlie and the Chocolate Factory (2005). ( this made me throw up in my mouth a little bit, im surprised he didnt want him to play the Mad Hatter as well)
OK, so I have not done the best job at ripping this guy a new one, but the truth is that his movies are a guilty pleasure of mine (I can only be a half hard core hypocrite). I dont have to think while his movies are on, true he has started to do a bit more pansy-ated movies, but he is going where the money is being thrown to him, we would all do the same thing. My only hope is that some day I can see "The Rock" back in the ring beating the shit out of Kenan and Carson Daly, that would be the best. Hopefully you agree, but if you dont, (to quote him) "it doesnt matter what you think".
Posted by Nomad at 6:24 PM

When I saw you were going after The Rock I wasn't happy, being a fan of his as well.

But then I've never heard of Race to Witch Mountain or The Tooth Fairy. I didn't realise how much of a pussy he'd become.

He deserved your mild beat down.

Okay, now I'm back to not happy. You didn't put Tina Fey on your SNL quiz.

Dude, he'd have been an awesome Mad Hatter.

I was just thinking about this same topic the other day. I had gone to the movies and there was a huge cardboard cut out of The Rock as the tooth fairy.

How on earth could he play Willy Wonka?!?! I'm so glad this didn't happen.
I read his autobiography when he used to still be a wrestler...it totally sucked. It was a constant namedrop to his dad. Bah.

I used to like him but then he had to go and do an Ice Cube...

I haven't seen him in a pansy kids movie...but I'll admit that in his other movies, he makes me drool a bit. Not quite sure why. He's not normally my type.

I liked his Scorpion King movie.
I don't care for wrestling (so fake), so I didn't know him back then.

I have yet to watch those kiddie movies.
But yeah, you gotta go where the money is.

2nd choice for Willy Wonka? this made me vomit a little bit more than just in my mouth.

My favorite appearance by the Rock ever was in a MadTV skit with Drunk Girl, one of the most unappreciated characters on the show. And I can't freaking find a copy of it online anymore. $100 for the person who can.

Awesome post and I love your writing style. I almost feel like I was a fly on the wall while you were writing this! Did you see when the Rock portrayed President Obama on Saturday Night Live? It was hilarious and he grew out of his shirt. Thanx for stopping by today sweetie!

What a neat blog you have here!!! Thank you so much for visiting me, please do visit again soon.

I am off to read more of your work:)

You're right, The Rock's movies have made him more and more of a Roody Poo Candy Ass.
If you smell what the Rock is cookin...

Oh I cannot imagine him as Willy AT ALL. Not that I saw the Johnny Depp remake, but can you imagine The Rock in makeup and a top hat?

Eh, he's a likable sort of fella, especially since he dropped the impossible-to-take-serious moniker "The Rock" in favor of the relatively anonymous-sounding "Dwayne Johnson".

I can't imagine him as Wonka, though. It would've been too easy for a movie critic to say, "What this movie needed was an Everlasting Rock Stopper."

i'm glad everyone was as shocked as i was that he was actually thought of for the part of willy wonka, not that the movie was great, or even needed to be redone, but definitely not with the rock.

sco- i would add tina fey if i knew how, but in our hearts and minds we know she wins all.