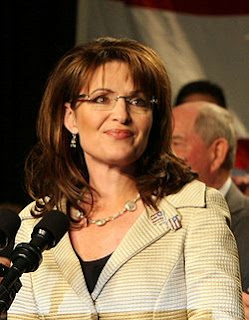 This week I was sure not to forget what day of the week it was so I could write my ever popular celebrity Sunday blog. Like I have said before I use the word celebrity very loosely when selecting a victim, they can be a anything from a superstar to just a well known public annoyance. With that being said, today is about someone who can fall in to either category. Sarah Palin.
Her name gives you chills doesn't it? To think that just over a year ago this woman was in the running to be the Vice President of the United States still does not feel real. One minute she is being tossed out of PTA meetings and parent teacher conferences, and the next minute she is tooling around on the campaign trail with McCain, what a life. The other women from Partylite and Bunko must be so proud, hopefully they don't start thinking that they can run the country as well though. Who would be there to bake cookies and drive the kids to soccer?... Without mom's like Palin at home soccer in this country would become even less popular, if that is possible (we would still find a way to make cookies though, believe me). I don't hate Sarah Palin at all, I really don't, I just think every press conference with her would have felt like she was trying to sell me Mary Kay or some Tupperware. Trust me this is not a sexist statement either, if it would have been Hillary as much as I dislike her I would have at least taken her seriously, I mean that broad has balls. Literally, they are in a jar on her desk marked "Bill's Ball's"... OK, maybe this blog is gonna be a tad sexist but deal with it, its still true and funny. (PS. I apologize for having no Alaska jokes, but honestly Alaska is just not that funny.)
Lets try and look at the what if... the what if Palin had ended up in Washington.
-For starters, she is probably great with a calendar and a dry erase board, so the president would never have missed any appointments. In fact if she were there I'm sure a lot more would have been done in the past year than has been done with O-bomb-a. Even if the only thing she did was complain that her nose and hands were cold at least she would have gotten the heater fixed, pretty sure O-man would even have problems with that.
-She could have checked the temperature of everyone on her staff, that would save thousands in medical bills.
-She could have gotten Tina Fey back on SNL a few more times to mock all of the dumb stuff she surely would have said.
-She could carry the Secret Service's guns in her purse.
-She could cut out coupons, watch for sales, and do the grocery shopping, surely save some money there.
-She could decorate for all the holidays, I hear she is especially talented with Christmas lights. --If the limo driver gets lost she could help out from the back seat, we all know how great ladies are with directions.
-She would help re-decorate the White House by taking down all those ugly old pictures of dead presidents and putting up Thomas Kinkade and Andy Warhol paintings.
-She will be the one to let us know once and for all if National Treasure was fact or fiction.
-She certainly wouldn't have taken away our guns, considering she probably has one strapped up under the seat of her pick-up.
-She would have implemented a plan that would allow you to put your taxes on lay-away.
-She also would send out cookies to all of the people who didn't get a refund, just to make you smile..... Man, come to think of it, it might have been a good idea to vote John and her into office.
She has been fairly quiet this year, possibly because she has been working on this book of hers, but also possibly because she has like 14 kids to take care of. She is releasing her book 'Going Rogue' sometime soon if she hasn't already. I could have looked it up, but I'm not all that interested and I didn't figure you would be either. I am not positive what it is about either, possibly a recipe book, or maybe it is about the X-Men, I'll let you know if i hear anything. There has been some speculation that she may run for office in 2012, it would be fun to watch her and Hilary pull each others hair wouldn't it. Personally I think they should just give her a a daytime talk show, or at least a spot on Dancing With the Stars or maybe something on the Food Network, isn't that what they do with the rest of these annoying biatchas??? :)
Posted by Nomad at 10:45 AM

I still can't understand how so many conservatives think so highly of her. There must be dozens of women more qualified and intelligent than Palin who happen to be Republicans. But then again, look at the last few Republican picks for vice president.

I cannot stand this woman, and I am a republican.....

I love the SNL skits on her..

Even in australia we were terrified she would become VP. And we didn't trust you lot either. We though you might make it happen.

I don't think she's smart enough to even attempt those things.

That was a stupid move of McCain to appoint her as her vice president candidate. Cost him the election; serves him right!

I'd rather have Mrs. Clinton since she at least has brains.

"Taxes on lay-away" is the one-liner of the week. Awesomeness.

"she would help re-decorate the White House by taking down all those ugly old pictures of dead presidents and putting up Thomas Kinkade and Andy Warhol paintings". Awesome.

Taking everyone's temperature and baking a cookies for everyone? Sounds like her version of socialized medicine to me.