As I sit here and watch the probable last game of the World Series I cant help but think back to the days in sports before performance enhancing drugs. Back in the good ol days when the only drugs they were doing had to be snorted, smoked, or cooked. So in the spirit and memory of the athletes who made it to a professional level without drugs, it is necessary that I do a blog about athletes who roid. I hope you agree.
There is no hiding the fact that most athletes have doubled in size over the past 20 years. Take Alex Rodriguez for instance, when he played for Seattle he was probably able to fit into a medium jersey, a size 8 skirt, and weighed 215 lbs. soaking wet. Now a days the only thing small on that dude is his cup size (Kate Hudson can attest to this once they break up, its only a matter of time people). Alex's old self is like a stick figure in comparison to the monster he is today, he went from looking like a Spanish Gumby to Paul Bunyan, practically over night. This guy started eating his Wheaties through a well placed needle.

If they made it mandatory for all players to start using performance enhancing substances I wouldn't care quite as much. In fact, it might even make things a little more exciting, more home runs, more touchdowns, more slam dunks. Shit they need to force soccer (futbol) players to shoot up, maybe then there will be more than 1 goal scored in each game, and the Americans would find more interest in it. I'm all about fairness, and I don't think its fair that a select few take substances and still play with those who don't, its like a high school team playing against a pro team. Lets get some equality out there.
Maybe we can form a league that has only players who shoot up in it. We could test it out like Arena Football and see how it works out. Then we could have huge court cases and witch hunts in which we single out the players that sneak into the league who don't use steroids. I think that would be fun, they will make movies about it someday. We could call it something really catchy like, The League of Extraordinary Gentlemen or Roid Monkeys, and we could charge double for tickets because there is gonna be double the scoring, double the hits, double the fights, and double the death. It would be great...
I really do wonder what goes through these guys' mind the first time they decide they are going to juice... I mean, do they think that people wont notice? It'd be like if some 300lb dude took a shot that helped him lose weight, and 3 weeks later he was 190. He's not fooling anyone. To me roids are the same idea in reverse, if you have worked out for years and max at a certain size and then double that mass in a month. We are not going to just assume that you got a growth spurt, ate some spinach, and drank a Red Bull, especially not when we see the syringes hanging out in your locker. 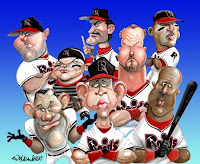 Maybe I am just judgemental because I could never do this. First of all I hate needles, if they found a way to put steroids into a slice of pizza, maybe then I'd consider. Until then, no thank you. Lets hope that I don't get diabetes, because I would rather die than have to poke myself on a daily basis. Secondly, anything in which a popular/common side effect is permanent shrinkage you can keep far away from me. That'd be like if someone told me I could take a drug that allowed me to juggle really well for ten to fifteen years, but after that there was an 80% chance I'd go blind. I am clearly not a gambling man, especially not when it comes to my sling shot and stones. The only good correlations I've noticed when people use are their bank accounts go up, and they set records, but what is that all worth if you are hung like a squirrel when you retire.
Well, you probably didn't learn anything from today's post except that I hate needles and I am in the process of building a roid league... Other than that you probably burned as many brain cells as you would have sniffing spray paint out of a paper bag, but look on the bright side, at least your junk is bigger than Barry Bonds...
Posted by Nomad at 7:43 PM

I say let athletes roid up. The harder they hit and the faster they run the more exciting it is for the rest of us. And hey, it's not my testicles shrinking.

Great stuff. As a Yankees fan, it's a great day indeed. Hopefully MLB is past the steroid era, but who really knows?

Love the idea for a All-Roid League. They could cut corners on costs by having the batting helmets double as hot tubs.

this would be more funny if i didnt know for a fact you did roids, ive seen those guns