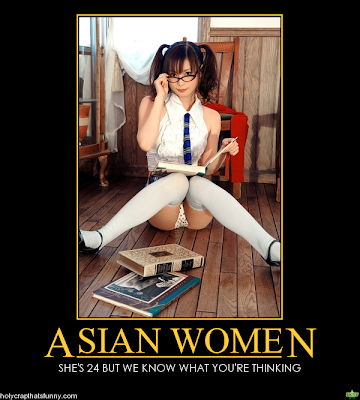 This post is going to be directed at a very slim group of people... At least the group that admits to it is very small, but they are out there believe me... The group that I am referring to is typically made up of males, in fact I personally have never met a single female that swings this way, but I don't know everyone. OK enough with the anticipation, I am talking about the gentleman of the world who are overly captivated by Asian females.
Overly captivated to the point of obsessively fantasizing about them, overly captivated to the point of not concerning yourself with language barriers, butter faces, snaggle tooth's, or personality defects. Before you argue, I can assure you that people like this exist and they are more rabid than my 9th grade creative writing skills can elaborate upon. I used to have a manager at my restaurant who was asianphile to the core, if one of them was at a table he would make sure to stop by there at least once. More than likely if they were above a four on the scale he would offer to buy some part of their meal, being the good employee that I was I would be sure to find him every time I had one at my table. I have met a few other guys like this in my life, but this was definitely my closest and most frequent experience.
What is it that puts these men into a trance? Is it the fact that they all weigh less than 110 pounds, so it makes you feel more like a man? Is it the fact that they laugh at every thing that you say? Not because they think you are funny, but because they don't understand a word that you are saying... Is it so you can bring them home to help you with your math homework? Or science possibly as well?? Is it because of all the great vaginal rumors you have heard, shooting ping pong balls and such? Is it the fact that they are so good with chop sticks? Is it to make sure that there is a doctor in the family? Is it so that you have someone to explain the point of Anime to you?.... I don't know what the reason is, but these guys are out there and the Asians need to be warned.
I cant think of any sure fire ways to avoid or control these guys, they are usually a secretive bunch until their fire is stirred during a night at Benihana's... Let me remind you of the different levels of these Asianphiles, there are the everyday guys who like to tour the globe and check out what other countries have to offer, but then there are these creepos who want nothing to eat but fried rice and sushi, watch out for them.
I wanted to make this one short and sweet, like an Asian, heyo!
Posted by Nomad at 5:42 PM

Firstly, I had my first experience with an Ed Hardy tshirt today. It was on one of our Underworld gang figures on the news (we put them on the news here instead of in jail), and if that's what he wants to wear good on him I say. I have no problem with that. I just wiki'd him and he's a former boxer as well. Yeah, no worries with him wearing Ed Hardy at all (Mick Gatto is the guy's name if you're interested in a Google search)

I have an Asian friend and I have a friend who wanted to be introduced to everyone that Asian friend knows.. friends, family.. so long as they were girls in about our age bracket.

Of course, he didn't come right out and say "I want to meet Asian women" and of course, my friend was happy to help him meet a lady.. but he really doesn't know many Asians, so he kept feeding my friend Caucasians and we all had a good laugh.

Very well done! I am a white gal who was raised on Oahu, Hawaii (pop was in the airlines, not military) and I can relate to this post.

ALL my friends were asian. Standing 5'8" with blue eyes, brown hair and freckles, you can imagine growing up was a little uncomfortable. I felt HUGE in comparison!

Having worked as an exotic dancer (ok, stripper) in Waikiki for 10 years, I came across many men who only liked the beautiful asians. It never really bothered me, but it is interesting.

Everyone has a certain type they are drawn to, and I celebrate that!

i think its just cause they never age, i always check ids of asian girls who i think are 19 and they end up being 30, so they can attract a wide age range of guys. wish white girls were as lucky in the aging process...

haha, I guess I should watch out for these men!

That whole paragraph where you asked what put them into a trance was hilarious. You've listed all the things that are deemed to be typical of asians!

But I'm sorry I don't have an answer to your question. (:

I'm married to a Black man, and I detest being asked: "oh you like Black guys?" No, I didn't only date Black men. In fact, my husband was the first Black guy I dated. I just fell in love with him regardless of his race.

Thanks for that. It was about time that some one addressed this fact, and warned the Asian girls!