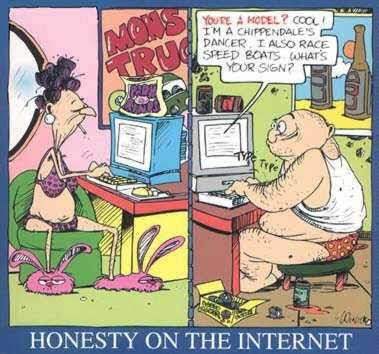 There are many technologies in the world today that have made normal tasks much easier for humans to complete. Everything from the television remote, to the internet has helped speed up things that we do on a daily basis. But what happens when you combine new technologies and laziness? You get internet daters...
This is what happens when no amount of alcohol or date rape drugs can make you appealing to the opposite sex... I can admit that it may make the whole process quicker, but taking the initial human contact out of meeting someone defeats the whole purpose. The thing about the internet is that you can pretty much be whoever you want... Which is not really fair in the world of dating. Trust me, more than once I found out the hard way when I stumbled onto the set of "To Catch A Predator"... I have always just assumed that these sites were meant for ugly or socially retarded people, but the commercials will lead you to believe that they have have super models waiting to find love on there. I am skeptical because as far as I have witnessed in my life all these people have to do is leave their house and they are offered dates, or at least friendly pokes. 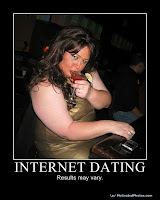 They have found a way through commercials to make these websites such as Match.com and others to look so appealing. Sort of like the penis enlargement commercials that sound so great at first, until they remind you the side affects can also cause you to go blind or lose limbs. They make filling out surveys and finding love sound so easy, I dont know why we have not been doing it this way since the beginning of time. I cant imagine how much money I would have saved knocking out all those dates if I could have just fallen in love via keyboards and monitors... Not to overly offend anyone who may have gone this route in the past, but I just dont think that the internet can give a fair representation of anyone... When you have hours to write back or respond to someone you can seem as witty as me, and that is just not fair.
What type of person does it take to fully commit to online dating? Is it the shy socially awkward person who doesnt even bother to make excuses for why they are on there. Or is it the stay at home single parent who never has time to go out? Maybe it is the gamer addicted to their computer screen that looks to EHarmony to fill the void that no dungeon or dragon can. Perhaps it is the business person who spends 80 hrs a week in the office so the only dating outlet they have is over the internet. I dont know, I can make excuses for these people for hours but it still seems a little too "new fashioned" for me. True maybe I am just an old fashioned, like to see who I am actually talking to kind of guy, but I just say dont fix it if it aint broken.
Funny side-note. While I was writing this, not one but 2 commercials, 1 for Eharmony and the other for Match.com both came on TV. I think it was fate that brought us together today.
Posted by Nomad at 4:42 PM

Yeah, I'm kinda skeptical that everyone on Match.com is as attractive as the commercials make them seem. I'd love to see a completely honest version.

so true. i think this definitely defeats the purpose of us being humans and as humans... we interact. LOL... not via internet. oh boy. the internet is great.. in some levels.

I was on Match.com for over a year. All I can say is the experience makes great blogging material!

I have a friend who signed up to a few of these sites. They're a cool person. Attractive. I don't know why they did it. They must be like the A+++ standard of the site, but they do wonder why they only ever seem to meet freaks and weirdos.

wow! I think that now and days it all sorts of people that use this services, maybe it started out witht e geeks and stuff but now and days people are to busy to get up and do anything lol..

I agree. Dating the old-fashioned way is the best. How else can you know if you like the other person if you don't get that awkward-tongue-tied-butterflies-in-stomach-sweaty-palms nervous feeling when you try to simply say hello? Lol.

Ah, the true magic of personal connections. And that To Catch A Predator is no joke. Really no joke. Lol. They catch anybody.

ve been internet dating for about three years and am suprised by what I've experienced, just want to see if it's normal.

i know there must be a few normal people on these sites, i just cant help be disturbed by all the ones who are not.