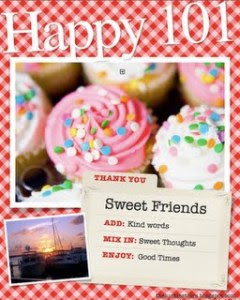 Today is a special day... I have gotten a slight bit of criticism in the past for being negative, or for only finding the wrong in people, or for being debbie downer. This could not be further from the truth, but I can see how it may appear that way from the content of my blog... Let's be honest though the annoying people of the world are much more fun to read and write about on a daily basis than the non-annoying ones... Anyways, I have decided to combine today's blog with an award that was recently given to me by my girl LMJ. I am supposed to write a blog about 10 things that make me happy, and then include 10 blogs that make me happy... Since I have to write each day about people I've decided to write about 10 individuals or groups that make me happy, I hope this is acceptable. I would hate to be stricken down from the Bloglords with blogflu or blogritis... OK, here we go. In no particular order.
OK, so now it looks like I am going to throw out 10 blogs that I like... Don't be offended if you are not on this list. For one, I'm not that important for you to worry about my opinion, and two, I'm probably not the only person who doesn't like it. I'm hoping that this works, I'm not a real pro with the technical side of blogging, which is sad if you think about the fact that I consider the writing my strong point... Yikes. Also, if I link you, And I so happen to be one of your 10 favorites. First of all I am flattered, feel free to put me up for the award again, I love exposure. But, don't be fully alarmed if I don't re-do this whole thing, I'll just give you another shout out or something.
Good Lord that took Forever.
Posted by Nomad at 11:49 PM

I love Santa Claus! Who doesn't?

Haha...I've always wondered what Gordon Ramsay is like in bed.

All these sound like great blogs. I'll definitely check them out!

I love JT AND Tiger. I hate when people get all huffy about something that goes wrong in a celebrity's personal life. Yeah, it sucks, but it doesn't take away from the fact he's mad talented.

Hey, I hope I'm not amongst the bad bloggers out there! Just found your blog through 1000awesomethings. Keep going and visit mine when you have a chance so you can judge for yourself : www.bluamaryllis.wordpress.com
thanks!

Gordon Ramsey is my hero. You should do a blog post about some of the idiots on Kitchen Nightmares sometime :)

SPEAKING FROM THE CRIB said...

that had to have taken forever. i found you from I'VE BEEN THINKING and i've got several items.

first off, i love gordon ramsey. do you watch the bbc version of kitchen nightmares? stellar programming.

third off, scoman is one of my fav blogs ever and he is getting my top blog of the week guest post tomorrow, so you should totally come and check him out

At first I liked Tiger when this whole thing came out, because as you said it made him human and I was sick of him being so perfect all the time, but now I'm tired of hearing his name. It's funny how quickly my opinion can change.

And Dexter is awesome. He should have been way further up the list. Above Ramsey for sure.

Thanks for passing on the award. I better do something about all this stuff soon. I like doing these things, I just.. haven't been doing them.

Congrats on the award very well deserved!! :) and you are welcome ( I am one of the bad bloggers that makes you look good)!! :)..

Thanks so much for the shout out. I've gotten awards before but I don't think I've ever gotten one from someone who doesn't like so many things. I feel special.

First, Your welcome:) I'm glad I can help to make you look better!

Second, grrrr! I have a GREAT sense of humor which is why I am following your fab. blog however making fun of "crazy" people? Not cool. Why not laugh at people in wheel chairs and burn victims too? I realize that in order to be funny, you have to offend people at times. I guess it was just my turn to be offended. It's just that people with mental illness are fighting a stigma. This is why I am forced to remain anonymous. My career depends on it.

Thanks for including me! I hope needing no explanation is a good thing :)