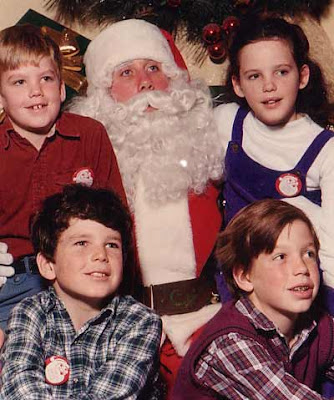 It is now Chistmas Eve and I am with my family (which doesn't happen often enough) so I am going to make this semi quick... Still fulfilling my duty to my blog, while not making my mom mad. I only have one more day of holiday blogs after this, so that is pretty exciting... I decided today for Christmas Eve that we could take a brief glance at the Mall Santa's... 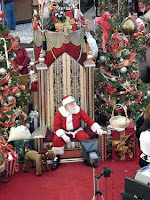 Lets be real for a minute, these guys could either be some of the nicest old white haired men on earth or they could be the sneakiest creepers around. I cant imagine that the pay and the month of work is enough to keep these guys coming back yearly. So what is their story, are they retiree's who just want to make some extra money around the holidays, are they the greeters from Wal-Mart trying to pick up a second job, are they bearded priests who went for a career change, maybe they've recently been fired from their local circus jobs. Whatever the case I just assume there is at least one screw loose that would cause anyone to want to have little kids come and sit on their laps for hours at a time... That's like babysitting every kid you know for five minutes at a time, for what I imagine is not much more than minimum wage... Maybe these are just really friendly old men who just want to keep the Christmas tradition alive, this is the one I am banking on. It really is nice that we have people willing to do things like this, because I cannot imagine that this is a very fun job. This is one of the jobs that I think should be on that show Dirty Jobs... I mean, we all know how often babies spew, how often do you think Rent-A-Nick has to wipe up chuck off of their rented red suits.

If I seem a little bitter its only because none of them would let me sit on their laps after I reached twelve... What kind of message does that send? This is why people in America have such a lack of imagination, we steal the fairy tales away from the kids as soon as we can... The sad thing is that we have no problem breast feeding a kid til he is 8 or pushing around kids in strollers 4 years after they have learned how to walk... There was my little tangent for the day. What happens if all of these Santa's unionize and demand raises, I bet we'd have to give it to them, these days with all the Internet shopping that I can do the only reason I'd step foot into a mall is to have a glimpse at the fat man... And why are some kids so afraid of them? Is it the hat? is it the over abundance of red? Is it the beard? Maybe I will never know, but I am proud to say that I was never one of those kids, I was the one who was ready to go see Santa the day after Thanksgiving. Eventually I realized that there was more than one and convinced myself that they were obviously special helpers outsourced by the North Pole... I was logical enough to realize that Santa could not be in all malls at once, but skipped over the fact that he would have to service about 1 billion kids in over 190 countries in one nigh in flying deer to boot. OK, maybe I was not all that logical, but can you blame me??? I just hope they have fairly extensive background check run on all of these guys, not that those matter these days, but its the thought that counts.
OK, its basically Christmas now. So Merry Christmas, Happy Hanukkah, so on and so forth. Enjoy your day... I'll be back tomorrow.
Posted by Nomad at 11:23 PM

Okay that first santa looks totally stoned! I think they should have background check & be cleared before they see santa. They have to be sick pedophiles, wanting little children to sit on their lap all day. At our mall, they pressure you hardcore into buying a picture, and each picture is $15. that's pretty crazy.

My boss usually plays Santa for the fire brigade. I don't think that comes with kids sitting on his knee though, I think it's just walking around their Christmas thing handing out lollipops. That I can understand. Seeing the joy (or fear) on kids faces.

But having smelly, dirty, sweaty kids sitting on you for hours on end? No thanks.

i read somewhere that mall santas make about $30,000 a season, so i guess its worth putting up with all the kids (and pets) for

I have always worried about how those Santas get their "jollies", if you know what I mean..