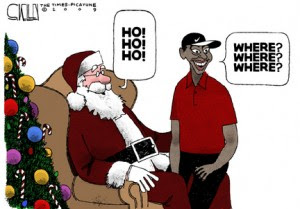 It is funny how the most important story on the news in America is almost always about some celebrity's personal life. Which is why I decided to start off today's post with a popular picture that has been passed around. I figured it was both festive and informative, so i hope you did as well... As far as my 124th topic is concerned I have decided to go with another fairly popular group of people, the one's who always want to play rock, paper, scissors, to determine a winner for things...

OK, you got me this is not a hugely popular group, but there are no doubt a few of these people left out there... I seem to remember the popularity of this game dying off for my friends and I in about 5th grade when we realized that there were far less diplomatic ways to determine winners for certain things. Apparently someone decided to resurface this fun hand-held game within the past few years because it became very popular once again amongst college aged kids. The grown up version I was most recently exposed to was repackaged as Ro-Sham-Bo, same rules different day... The name change is definitely what caused such a huge comeback, similar to Prince, The Rock, or Puff Daddy re-inventing themselves. Ro-Sham-Bo could now identify with the much more sophisticated college frat boys... The rules are as follows: 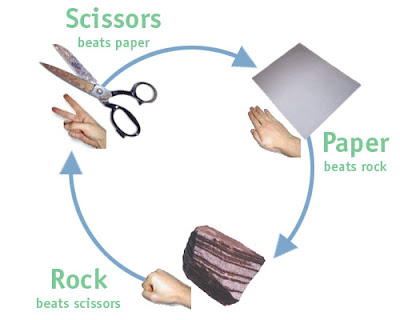 Now that we have cleared up some of the history and the rules, lets talk about who actually plays the game... As I said before, it has historically been known as a pre-pubescent game played perhaps to see who gets to go down the slide first or who gets to use the taller drinking fountain. However the game has evolved into something much more than it was originally intended for. It is typically used as a selection game similarly to flipping a coin, thumb war, or pulling sticks, it is the perfect solution when necessary props for one of the previous games are not handy. The game is traditionally more popular among the male species ages 5-13 and 19-26, it is not limited to these ages but this is where the popularity is most concentrated. It is played most often by those who are highly competitive and who like to turn everything into a game. For them the simple task of picking what is for dinner could turn into a small game of rock-paper-scissors. They typically become so obsessed with the game that nothing can be decided in their daily routines without a ro-sham-throw down... I have met people like this who are not satisfied unless they have won a bout, I liken this to people in the old days who liked to have small competitions or sword fights to determine things. We have always been a people of competition and of proving ourselves, they just want to carry this tradition on as much as possible...
To be honest with you when I started this blog I intended it to be a quick filler to cap off a long day, but after a small amount of research my eyes have been opened to the wondrous world of rock-paper-scissors... I bet you did not know that there has been a world wide competition to find the best ro-sham-bo'er our there, unsurprisingly Canada has won all but 2 years since its inception. After spending about 20 to 30 minutes on the wiki page for this sport I am both embarrassed and amazed. We will consider anything a sport these days, anything for some good old fashioned competition I guess... I wonder how long these guys have to train for these championships, I guess as guys we are pretty much used to the specific motion needed to be successful... I bet Edward Cullen and his mind reading would be awesome at this... hobby. Shockingly I did not see one females name on the entire Wikipedia page, from top to bottom, seems like the ladies pretty well distance themselves from the sport. Keep that in mind, I'd stay away from using this as a way to impress your new crush.
Until next time... Rock, Paper, Scissors, shoot!
Posted by Nomad at 12:17 AM

Do you watch The Big Bang Theory? Those guys have expanded the game into Rock-Paper-Scissors-Lizard-Spock.

Do you know what type of people play this?

The type of people that go on Big Brother.

Yeah that's right, I watched that show before it was canned here. It was like.. science or something. Watching lesser species caged and trying to survive.

Anyway, it seemed like every series some jock would decide the best way to decide everything was with a "rock off". From who does the dishes to who drops a reverse kanga in the girls toilets, there's nothing these guys couldn't decide with a game of rock scissors paper (because their brains were not developed enough for conversation and discussion)

We always called it farkle.... but then we made up a new game called sofo but it's too difficult to explain. There are only two other people who know it, so I rarely play.

Canada has all the awesome.

Except for Amsterdam... I heard they have a Cannibus Bowl on Thanksgiving. I guess to keep the americans out.

You gotta buy the Rock Paper Scissors Strategy Guide. It was the best 5 bucks I ever wasted. It's hilarious from start to finish and has a multi-page regulations section that just leaves you laughing your ass off.