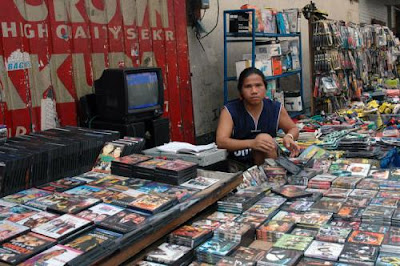 The more days that this contest I am in lurks on the more worried I am about not making it to the next round. Initially I was in second and I have been moving back and forth between 3rd and 4th over the past day. Voting stops at 6 PM on Wednesday so I hope you guys can make it over to vote on the right hand side of knuckleheads blog... With that being said I believe it should be safe to move on to today's post. Ive decided to write about the people who film bootleg movies for the rest of us...
Now, on one hand I have nothing but complaints. These guys have clearly taken absolutely zero film classes in their entire lives. You would think with a career so directly related to film that they would have at least learned how to put a camera on a tripod straight or at least center it on the screen. But no, time and time again I am forced to buy or download these low quality bootlegged videos... It is preposterous, and don't even get me started with the sound, I am lucky if I can make out one out of every three words that the actors are saying sometimes. Its like trying to watch Inglorious Basterds without having the subtitles. And how about those guys that go to film a movie that has subtitles and they aim the camera too high, come on now guys where is the common sense? Oh boy, and the guys who let people walk back and forth in front of the camera, hey buddy, I waited fifty minutes for this video to fully buffer, so sit your ass down... Have you ever had the guys who you can hear opening the candy wrapper right next to the microphone, as if it wasn't hard enough to make out what they were saying before now I have to hear this dude chomping down a Snickers bar. Come on guys, if you are going to continue to run a successful underground operation you are going to have to improve the quality of your product or we just may start paying $19 for a ticket and a popcorn...
Who am I kidding? I will download any movie I can if that means I don't have to take a second mortgage out to pay for a ticket. Now, I realize that there are certain costs that the movies have to cover, it makes perfect sense to pay actors upwards of 20 million a flick if you can keep getting higher ticket prices. But when does it stop? I mean before I left New York I would go see an average of one Broadway show a month and that would end up costing me less than a day at the movies. So people who film movies in the theater so I can sit in the comfort of my home downloading all the new flicks in my underwear. I salute you. No, you are not quite as brave of the soldiers over seas, but you sure are up there. There was one year when we were having a really cold winter in NY and I was being super boring where I just went and downloaded and watched every new movie on the specific site I used at the time... When I was done I felt like I had just robbed a bank and it was awesome. I had literally just watched about $200 worth of movies and I didn't even have to leave my bed. I didn't have to sit in a smelly chair, with my feet stuck to the ground, some douchey kid kicking the back of my chair, while some other twat talking to the screen, no I was laying down watching the movie on my laptop the way it was intended to be watched. The invention of bootlegging movies has to be up there with the wheel, and water, and toothpaste. Its like I am theater hopping but with the touch of some keys and the stroke of a mouse.
So the moral of the story is, if you ever happen in on someone who has decided to film a copy of a new feature film, please leave him be. Because there is a slight chance that I just may be watching that movie someday online and I really don't want to be distracted by your mouth.
In a funny side note I have a story about my mom (sort of relates)... OK so Ive downloaded music on Limewire over the years, lots of it, and my mom has always full on judged me for this. She pulls the whole illegal and immoral bit on me and while I listen, I don't really listen if you know what I mean. Anyways, her and my sister have gotten on this kick where they rent Cd's from the library and then upload them onto their computer and then put them onto their Ipods, now, is that or is that not the same thing I do just in a slightly more diplomatic way??? She says that her excuse (because yes we have had this talk) is that the library has paid for the CD so what they are doing is different, I am sure that someone that I am sharing with on Limewire bought the CD and shared it with millions of people.... Am I right or am I right???
VOTEVOTEVOTEVOTEVOTEVOTEVOTEVOTEVOTEVOTEVOTEVOTE
Posted by Nomad at 12:12 AM

Yes you are right!!

LOL! I have this...mmmm..favorite online page where I watch those movies. I jsut watched Avatar and Sherlock HOlmes...I just wished the dude wasn't eating/chewing so freaking loud!

Voted!! And I am all for bootleg movies and stolen music. I mean....

A favorite of mine was the bootleg of the Wolverine movie. The special effects weren't' even done so the end of the movie was just a step up from green screen.

Your mum and sister are strange. They could at least RENT things if they're gonna be like that. I mean, seriously, saying that it's okay to rip-off the Library's stuff but Limewire's not okay(I don't like LimeWire, but that's just limewire) Personally I usually like to go to the good old fashion dollar theater with the month old film and stash a box of candy in my coat's inside pocket before I come in.

Not that I don't pirate movies.

A friend of mine has given me burned copies of bootlegs and I have to say, the $9 ticket is worth saving the irritation. As for what your mom and sis do...ha ha ha ha, you have kettle and pot on your black arse!

Sort of related - I am so thankful to the people posting the feed of an out of area football game because it saves me so much money from having to go to the sports bar and drink beer and eat greasy food.

My parents did almost the same thing. They'd be all judging me for downloading music and I'd be like "I'm a student, I can't afford all these CD's", but now they visit my grandparents and burn any new DVD's he's purchased so they can take them home and watch them.

We should totally report our parents to the FBI. Or have friends ring up and pretend to be from the FBI and question them about it.

You're totally right!!! And OMG I've never watched a movie like that lol.

I may be one in a million but I hate "stealing". Specially music.. movies I dont care, but music I feel strongly about for some reason..

Your mum and sister are strange. They could at least RENT things if they're gonna be like that. I mean, seriously, saying that it's okay to rip-off the Library's stuff but Limewire's not okay(I don't like LimeWire, but that's just limewire) Personally I usually like to go to the good old fashion dollar theater with the month old film and stash a box of candy in my coat's inside pocket before I come in.