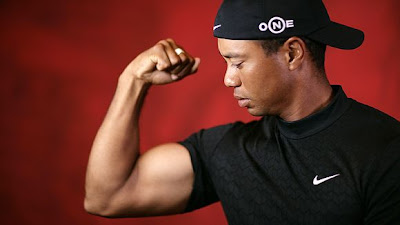 Hello My faithful readers, I have been invited to participate in a "Blogger Idol". Over the next few weeks I will post my entry from the pre-determined category on my blog, and then link you to the blog where you will vote for me if you so choose. Or you may vote on any other post linked from that page that you like. Basically this is post one (a satire on a current event) check it out and if you like it follow any link I have posted and vote :)...
Growing up in a family that lives and dies by the saying "no news is good news", I have learned to keep my distance from "the paper" or any news program other than the Colbert Report. It is not that I am trying to hide from reality, I just choose to create my own, you should try it. I have enough crap to deal with on a daily basis between my worldwide blog and remembering to brush my teeth that I don't have time for airplane bombings and celebrity overdose's. Maybe if the news was a little more "chipper" I would subscribe more regularly, actually I probably wouldn't, but it is nice to think that I might. As I scoured the Internet for an uplifting story to re-report on only one such story caught my attention. Of course I am referring to the recent ever exciting Tiger Woods Saga.
For years Tiger has worked to popularize golf by combining the color of his skin and the caliber of his talent, but in late 2009 he took drastic measures to widen his crowd. He devised a plan so massive that no one saw it coming, except me. I have known for years that Tiger was going to ghetto-fy this historic gentleman's game I just didn't know how. I have finally finished my research and talked to my last source, so I am now ready to report my findings. Let me just say that although you may not approve of the course (No pun intended) that Tiger has taken, you will at least have to respect his careful planning.
For years Tiger has fooled us into believing that he was the Steve Urkel of golf, pants held high above his waist and shirt tucked in, the only part of the costume that lacked were the suspenders. He sacrificed the use of products he loved in order to endorse things he would never normally come near such as Accenture, Buick, Tag Heuer, and Nike. Lets not forget how he had a Barbie decoy wife for years to get us to buy into his whole "good boy" persona. For years he has faked his true being in order to lure us all in, and as soon as he was sure we swallowed the pill, he changed the game. In one last magnificent charade he had every bleached out trailer jockey he's piped over the years call in to CNN and "spill the beans"... Most of the world believed that this all happened by accident, but I am here to tell you this was his plan to Happy Gilmorize golf once and for all... Allow me to briefly explain my theory. 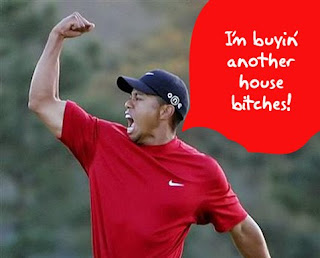 The women. My sources tell me that he paid all 15-20 (I lost count) of these women $10,000.00, a $250 gift card to Waffle House, and the first season of "Glee" for them to call in and tattle on him. This had a few benefits for him that no one else picked up on. First, this is the only way his money hungry wife would leave him and take the baby, and as everyone knows the first step in being a black sports legend is that you have to be referred to as a "baby daddy". The next benefit is that he knew this was the only way his lame sponsors would ever drop him. He was stuck in these contracts pretty much until he retired, but he found the perfect way to make them want to drop him. While at the same time he will be a little more appealing to the brands that he actually wants to endorse (mentioned later). Another important benefit is to briefly take all eyes off of your sport and put them on yourself, he did this like all the pro's before him, Kobe, O.J., Vick, Johnson, Iverson, Williams, just to name a few. So far Tiger has played his part perfectly.
Now you may ask what happens to Tiger in the future? Now normally this information would be highly secretive and classified but I feel like this is the perfect arena for me to share my insider information.
First off Tiger is not on a break right now, not at all. He is in the studio with Timbaland recording his first album, this is what any real star has to do in order to really "pop off". Don't worry though, he is not going to be singing about the divorce, his first CD is going to focus more on the hardships he had growing up at the country club and all that shit. He is already writing out contracts with all of his new sponsors, Playboy, Hennessy, FUBU, Escalade, and Popeye's just to name a few. He has retired all the trailer trash and has now been linked to everyone from Rihana to Tyra to Oprah, don't hate, he's not married any more so he doesn't have to narrow down to just one lady. He is now in his 3rd week of filming his new reality show called, "I Wood, Wood You?" its sort of like Elimidate, but he is the only contestant. You guys know you can't be a real powerhouse these days unless you have your own reality show... He is still going to be the front-man for all of the new golfing games in 2010, but rather than being made by EA Sports the makers of all of the Grand Theft Auto games have taken over production...
Since Tiger is really the only reason that people watch golf he pretty much has them "by the balls". They allowed him to implement 20 new rules for the next year. I got a leaked list of the first 10.
1. The new Lil Wayne CD plays on every tee box on the front 9 holes.
2. The new JayZ CD plays on the back nine, they are only allowed to switch when he says.
3. He gets to use a cart, because he is Tiger Woods.
4. He can wear his FUBU sweat pants and T-shirts.
5. Each green has cheerleaders.
6. They play the tournaments he is in on BET.
7. Caddy's are now also called "wingmen".
8. He gets a shot of Hennessy for each birdie.
9. 2 shots for an Eagle.
10. They let Katt Williams be one of the announcers.
I understand if you feel a little betrayed, shocked, or overwhelmed, but I am sure we will get used to the new and improved Tiger. It may be weird at first like using a spork or driving a Hybrid, but in a year or two you will look back and laugh.
(the first and last paragraphs are links to the blog you can vote on, make me proud :), help me move to week 2 pleaseeeeeee!
Posted by Nomad at 11:45 PM

It may just be that I am slow but how exactly do I vote? When I click on thelink it sends me to a nother persons blog?! Oh yeah Fuck Tiger Woods he sucks lol ahaha!

LMAO!!! Of course I am not going to vote for you because I am going against you, but it was still funny! I wonder if we all did Tiger?

It's possible that if I weren't wanting to kick your ass in this competition, I would totally vote for you. ;)

Tiagra - for when 18 holes isn't enough.

golf needs a bit of ghetto-ifying. it's so boring, i'm glad tiger did a little something to liven the game up.

Haha maybe they should make a diamond encrusted golf club too!

Personally, it is about time someone did something in golf to make that sport sound appealing.

There should be more sex in golf...there are just too many joke set-ups going to waste otherwise. ;)

MikeWJ at Too Many Mornings said...

I know I should have read the post but the title and pics made me laugh. Them alone are hilarious.

Yeah! He had to make boring ass golf interesting!!

voted! I tried to vote twice for you, but it didn't let me. =P

Another of my favourite bloggers just posted a post called "Follow Me".. I wonder if they're in on this too. If that's the case, I will vote between the two of you on your merits.

I'm not going to bullshit you and say "Yeah, I'll totally vote for you" when in the back of my mind I may not. I'm just telling it how it is.

I can't wait for that reality show. 12 Barbies lined up and Tiger going "Wood? You all already did. And because I ain't buyin the cow when I can get the milk for free, I ain't marryin none of yo skanky asses"

This absolutely broke me up! Great job, my friend. And it looks like you're gonna make it through to the next round.

His secret plan to ghetto-fy golf....I never saw it coming! But golf will be much more interesting with Katt Williams for an announcer-I might even try watching it once or twice :)

I wonder how long it will take for us to forget about Tiger's wandering penis.

You are hilarious - Of course I am voting for you! Good luck!

This question is for people like Skip Bayless who think Tiger Woods isnt the greatest golfer or athlete of all time. What do you think now? The man won the US open with practically a broken knee. He has won 14 majors, is the richest athlete in the world, the most recognizable athlete in the world. What more do you need to see he is the greatest golfer and athlete to ever live. His performance this week should be enough.

i love the sound of Tiagra, so much more appealing, and we know it works. Diamond encrusted golf clubs, cant believe i didnt think of that.

more sex in golf? wasnt that what got him in trouble?

It's possible that if I weren't wanting to kick your ass in this competition, I would totally vote for you. ;)

I got many information and some important tips with the help of this post. I would like to visit again.