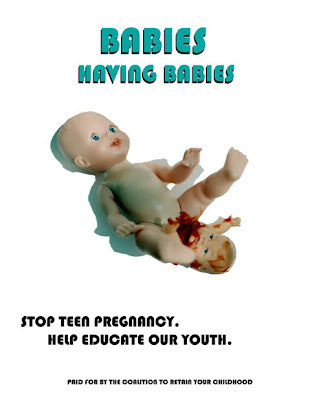 I have a new addiction, and it has forced my hand at another post. Before I begin I know I am going to be judged, both for the writing of this post and for the watching of this show. But there are people out there that watched Dawson's Creek so I really don't feel that ashamed. So its time to spill the beans on my new TV show addiction while at the same time introducing today's blog victim... Teen moms...
Now I am fully aware that MTV just selected the most entertaining teens to put on this show, and in this day and age entertaining basically boils down to trashy, stupid, and slutty. So I am not under the impression that all teen moms in the world behave this way. But since I have an observational blog, I felt that the girls on this show could not go un-observed. For those of you who have not seen this show, it basically follows the lives of 4 teen girls for a year or so after they have their first child. How MTV knew that they would all be such a mess and therefore supremely entertaining I will never know, but I also don't know why M(usic)TV does not play music any more, I've learned to stop asking questions. 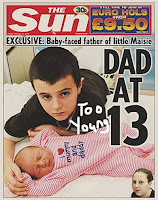 Part of me hopes that MTV is just playing this show so as a form of birth control for all of the other little idiots out there who think that they need to be riding the crazy train in 8Th grade... OK, I may be old fashioned, but I think it just seems weird to be baby-making before you can even drive. Besides this is why Christians invented oral sex, so they could have some fun before marriage without breaking all the rules... (That sounded totally awful, but I used this loop-hole as well...) Speaking of holes, where are the dads in all of this. I all of a sudden feel bad that I am putting the moms on blast when it is really the dads little swimmers who are at fault. On the show there is only one couple that seems to still get along. The rest of them look like they want to kill each other, and then there is the one whorish girl who probably doesn't even know who the baby daddy is, and if she does MTV certainly doesn't.
We all know that 9 out of 10 first children are accidents, but why is it that these accidents continue to happen to younger and younger girls. Is it the music? Should we blame Lady Gaga? Is it the movies or the video games? We like to blame these sources for almost everything else... I have an idea, maybe it is the teens parents, granted they cant stop them from everything, but in the case of the girls on the show it doesn't even seem like they try... Maybe it is just the times though. When I graduated from high school in 03' there was one girl in my graduating class who had a kid, out of like 1200 of us. Nowadays most high schools are probably having to build day cares in them. Holy shit. I just realized I graduated almost 7 years ago. I feel old all of a sudden...
The thing that bothers me most is that these days it really is quite easy to find a very accessible form of contraceptive, but none of these kids even seem to try... I mean sure it may be embarrassing to buy a box of wiener hats before you are even old enough to shave, but that is certainly better than having your first child before you are old enough to shave. In my humble opinion... And I am not huge on education (lol), but come on ladies at least finish high school... Otherwise how are you going to expect to convince your kid to stay in school when they get to that age? You know kids are notorious for using the old "well you didn't do it and you turned out fine"... What they never realize is that you turned out fine because you left him with the grand parents and stripped every night... Otherwise life would have been Top Ramen and Food Stamps for this kid. 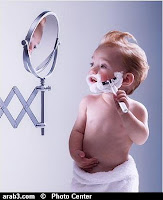 This whole situation reminds me of some Flight Of the Conchords stand up. I'm not going to go into detail because it is way less funny without their accents and I could not find video. But if you watch their old HBO special you will know what I mean... Basically they talk about babies having babies... Thank you for reading this random seemingly out of place paragraph...
Here are a list of reasons that you are too young to have a child:
1. You still play with dolls or sleep with a stuffed animal.
2. You sleep with a night light on.
3. You have never had a job, because you are not old enough.
4. The longest book you have ever read had pictures in it.
5. You share a room with your older sibling.
6. You take the bus to school.
7. You are not permitted to an R rated movie without an adult.
8. Your kid will be 6 before you can legally drink.
9. You will have to get your parents to drive your kid to daycare.
10. The majority of your news comes from your Facebook feed or Nickelodeon.
11. If you still wet the bed.
Two condoms do not work better than one, but will almost guarantee a fun game of hide and seek...
You are welcome for that picture.
Posted by Nomad at 11:11 AM

Your obsession is our entertainment. Full Circle, your table is ready.

There once was a time when Teen Pregnancy was highly valued by myself.

When I was at Uni, and would wake up every morning just in time to watch Maury Povich while having breakfast.

When it was an episode with a series of teen girls lining up guys denying to be the father of their baby, I knew I was in for a good episode (a lot better than those ones where he'd bring in animals.. serious journalism, who needs it?)

Seeing as you came clean about one of your embarrassing viewing habits, I thought I'd come clean with one too.

Scoman is right. Maury Povich really brought the wood when it came to illegitimate pregnancies.
What I would enjoy is a teen mom version of the Real World/Road Rules Challenge.

I'll admit... I've watched it. Also I like the picture of a baby shaving.

Never seen the show. Never watched MTV, not even when it was all music...why? Because it had these two stupid cartoon characters called beavis and butthead..somethng like that, and I couldn't stand them...so lame and stupid.

They are a clear reason why there should be some kind of eugenics control, all over the world. I know it sounds horrible..but come on! We can't afford to keep paying for their hospital bills!! I got married. I worked. I just gave birth to a legitimate child within wedlock; she was planned, and I'm old enough, and got a bill for $37,000!!!! It's going to take me 10 years to pay that!

Yet, these kids get it for FREE!!

Well that was entertaining.. And that picture at the top was um... Something else. Lol.

But I graduated in 07 and my high school had already had a daycare for about 5 years.

And I graduated with like 7 or 8 pregnant girls, not to mention the ones that already had kids...

I'm totally with you!!! I'm 22 and still feel too young to have a kid, LOL! But anyways, thanks for the insight on who invented oral sex. It totally makes sense.. jaja