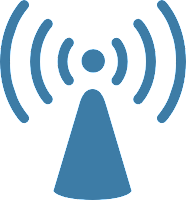 You know what makes me feel like George Clooney in "Oceans 11" more than anything else??? If you guessed stealing other peoples Internet; you were correct! Raise your hand if you steal, or in "our" words borrow others wireless Internet access(no, one is looking its OK).
Confession: My first year living in NY I didn't pay a cable or Internet bill and it was amazing. Amazing until the jerks next door decided to move and steal my free access away with them. Assholes, I know. I remember the day they moved like it was yesterday. I ran home from work to immediately check my Myspace, (Facebook was not popular yet) and the 49-3RE network was gone! I almost had a nervous breakdown. There could have been comments or emails that I was missing out on. You know the feeling, it was awful. I felt used, no warning, nothing, they just up and moved and took Myspace with them.
For a while I thought that I may have been the only person who had found this loop-hole in the system. I quickly learned I was not, as I travel and visit friends in other cities or other apartments around the city, I have come to realize that I was not the only Internet hi-jacker out there. It really is the best way to save $39.16 a month, and stick it to Time Warner at the same time. So don't hate.
I'm not aware how easy or possible this is to do in middle America where things are more spread out (I try and live where things actually happen, jk). So, chances are you just think I'm a cheap bastard, and I am. But here in NY where you can have up to 25 networks to choose from, all for free. How do you say no? You don't.
However, there is a downside or two. First, those greedy people who decide to put a lock on theirs, is that really necessary, no one is trying to steal your identity. Didn't you guys learn sharing is caring?. Second, when their signal goes down at 2 in the am in the midst of you re intense ichat conversation, Id rather just be shot in the face. There are certain things that just cant be said via text. I mean come on, you re paying for the service anyways, you may as well just share. I have even thought about trying to finding the person with the strongest locked signal and offering them some money for their password. My creepy level has not reached that degree yet. Yet. You'd do it too.
So, in closing. Go delete your password so I don't have to keep going to Starbucks to download pics of Emma Watson. For my school project. Research paper thing, on... English actresses...
TTYL.
Posted by Nomad at 8:13 AM

Good one! An old roommate of mine used to say, "If we have to deal with all these signals, floating around, not knowing what if they're screwing with our brains or not, we should at least be able to benefit from the Internet. Amen!

hahaah, thanks for the emma shout out

mine is on a password. it wasnt for the longest time, then someone else put it on one and locked US out of our own.

OMG!! I am totally stealing, I mean borrowing internet signal right now! It is the best feeling ever!! I feel naughty lol