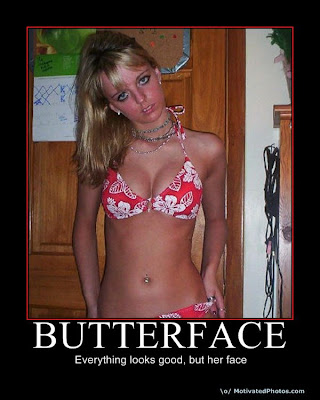 I hope everyone is enjoying their St Patties Day, I am going to hurry up and get this post out there before I join in with the festivities. I have tried to write a few of these posts under the influence and once I went back and read them they made even less sense than I normally do... Today I have decided to write about an unfortunate selection of people, some even call them God's little joke; the butterface's.
If you don't know what a butterface is, it is not because you have not seen one, it is because you just have not been enlightened. But if you think you are ready for one of the humanic wonders of the world, keep reading... Also known as a bag job or a brown bagger a butter face is basically a girl who has a body that's a 10, 'but her face' is down in the 1-3 area... The name basically stemmed from the saying "everything is good but-her-face", and from there became a world wide phenomenon. Another popular saying that is pretty much interchangeable with that one is "good from far, but far from good"... Ever since I was a young lad and I first heard this I thought that it was one of the most well put together lines ever, not just because it was fairly crafty and witty, but because it was true...
I think the reason that people tend to like observing butterfaces once they find out about them because the ratio of face to body is clearly upsetting some balance in nature... Typically we find people that have busted faces usually have pretty dumpy bodies as well... And vice versa people with gross bodies usually wind up having some funkadelic faces to top it off. Nature seems to like keeping things like that balanced for the most part... That's why usually when you walk up behind a girl with an apple bottom you don't expect her to turn around and have a rutabaga face, you expect the face to match the rest of the package... When it doesn't you can definitely tell that something bad is going to happen, its like when a black cat knocks over a mirror and all that stuff. I don't know whether to feel sorry for them or to make fun of them really... If you think about it a 10 body and a 2 face still averages out to a six over all... I know friends who have tried to make these calculations when deciding if a hook up is worth it.
My question is, do they know? I mean, girls for the most part know when they have great bodies, this is why the majority of them flaunt it and use it to their advantage as much as they can... So do these butterfaces ever factor in the disaster zone located above their neck? Or do they just try and deny it and take what advantages they can get? I bet they would have loved going to parties in the old days when half of them had the masquerade theme going on... At least they could trick people for a while at those things...
Regardless, my warning to you guys is to watch out for these creatures. They are out there walking among us on a daily basis and there is no telling what damage they could do if we don't keep them in their place... Drink responsibly and you will definitely cut down your chances of waking up next to one...
For your future reference, here is a list of a few famous butterfaces:
1. Lady GaGa, (oh now you get it, this game is easy)
2. Michael Phelps (duh)
3. Sarah Jessica Parker (looks like someone ran over her mug)
4. Tori Spelling (yikes)
5. Fergie (gets worse as she gets older)
I could keep going but I kind of want some input from you guys... So leave some comments!
Posted by Nomad at 3:17 PM

HAAHAAHAHAHA that is so funny!!! butterfaces scare the living shit out of me...it's just unnatural. XD

Great take on this, it is indeed a bizarre phenomenon. And it's sad, really, because a pretty girl with a bad body can always go to the gym, but ugly is forever.

And your examples are spot on.

I think Sarah Jessica Parker is hot. Probably because people tell me I look like her all the time.

So which do you prefer, hot body/ugly face, hot face/ugly body?

What if she's smart? (Trick question, I know that's not a factor.)

omgosh - I love this!! I joke with my guy friends about butter faces every once in a while. But only because we'll be out and about and I'll be like - what about that girl over there? She looks like she's hot - and then the girl will turn around and we'll all be like "oh." and an awkward silence follows.

I actually did not know that it stems from "but her face". This is easily the most valuable teaching I have gotten this week. Easily.

Haha. I think SJP is way beautiful. But I find a lot of people don't agree.

But I think if you're a chick this is kind of scary... Like has some dude ever thought of me as a Betterface?

Lol. But I my nose and ass are both way too big... So I think I probably even out.

HAHAHAHAHHAHA your blog has kept me laughing! this is great~!

Heheheh!
We also refer to this as Prawns - great body, ugly head.

Thing I love about NY: The women when you ppl watch ... why? You realize how many butterfaces there are in this city.

(Gee if only my male friends saw this, theyd call me gay...)

BTW i find the comment verification word to be most appropriate for this: icksity...

I think Lady Gaga's face is attractive (some of the time) and Tori Spelling's face isn't that bad either. An as far as the girl in the photo, she has a pretty face, she just has a bad habit of sun worshiping which will likely cause her to grow old before her time.

Everyone is entitled to their own opinion, the internet seems to be flooded with, domminated by even, millions of other "frat boy" types just like you. Maddox anyone?